I feel it's safe to say my mojo has finally returned completely!

I've talked about my "stitching mojo" constantly since March 2020 when it up and left me sitting on my sofa unable to stitch.  I tried many different things trying to get it back, but it refused to return.  Now it wasn't as if I got no stitching done, but I got very little done.  Since I'm the model stitcher for Salty Yarns this was devastating to me as well as to Sara, who in 2021 starting doing models herself to help me out.  I was able to stitch  very few projects, one which I loved dearly and couldn't put down, so I thought my mojo was back, but the minute it was done my mojo was as well.  So Coming to America by Brenda Gervais which I stitched over 1 on 28 ct. linen was done on time in November and I loved every second of that stitch. Unfortunately I still haven't decided whether to frame it or make it a bellpull.    I quickly tried to start another project after that but to no avail.  I kept starting different projects but just couldn't get interested in anything.  It was such a depressing time for me.  Especially since my job in Sea Trader was over when they (Sara and Mary) rented out my space to Jessica's Candies. (Yikes, the last thing I need to be near is a candy/ice cream store).  To be precise, Sara called me and said I had the rest of the winter off and they moved all the displays and merchandise from Sea Trader downstairs to Sbell Stocked.  Sweet Jesus thank God Vernon called me for fear I'd show up to see what was happening and told me to stay away from the hotel as they were doing it in one day.  I went in on Sunday and darn if they hadn't done it in one day.  Amazing, but sad for me as it was my space to sit and talk to customers and just be part of the action.   Oh, yes I also sold giftware when I wasn't talking.   I always complained about wanting to be home, but when it happens with no warning it was shocking.  But I do love not having to go in and now dread spring when I'll have to go back to the new location downstairs next to Shell Stocked.  Hopefully, we will be able to get some of the J1 students into work so I don't have to work 7 days a week.    Anyway, being home and with nothing to do but stitch, but not being able to stitch was a pain.  I did manage to stitch "Reindeer Games" by Erica Michaels before the holidays.   I made the drum and the strawberry and enjoyed them but they took me longer than normal so that drove me crazy, but I did enjoy the stitch and didn't mind the finishing so that was a win-win.  I used the colors suggested but not in the same place Linda did.  For instance her garland was red but I switched it to the green.  I also stitched the blocks around the lettering using red with white floss wrapped around the red back stitch to give the candy cane effect.   That's the biggest thing and then I did the lettering in the same green.  I used Weeks Dye Works green wool for the top and bottom of the drum as well as the holly leaves on the top of the strawberry. 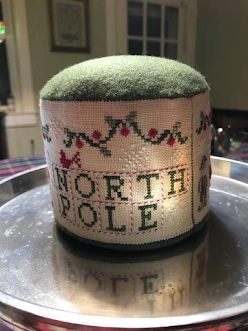 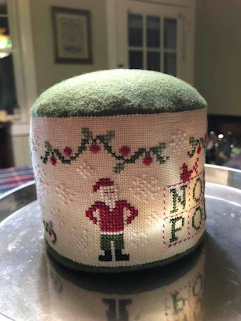 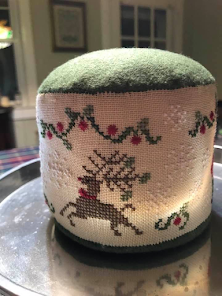 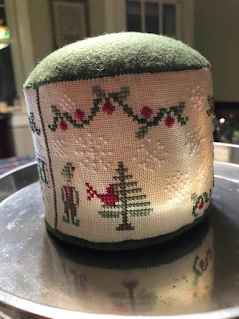 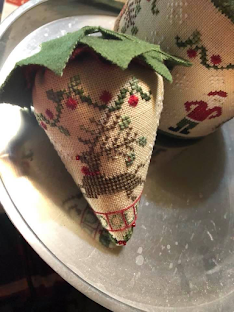 Reindeer Games Drum and Strawberry
The day after Christmas I thought I'd try again to stitch and decided to try Hands on Design's,  "Ready, Set, Snow."  I managed to stitch that with no problems, however, I misplaced the clay to make his nose.  The chart includes a piece of Weeks Dye Works wool to make his nose but I wanted the dimension so I'm still waiting to find my clay...ugh!  After that I moved on to the February models.  I was still slow in stitching, but feeling more like my old self and with Brenda Gervais' new booklet for Valentines Day -"Love Notes"I was off and running.  From that moment I haven't stopped stitching.  It's like the old days where I wake up around 2 a.m. to make the bathroom run, and then decide I can spare a few hours stitching before the day starts.  First I picked "Love Birds".  Every design in this booklet is stitched using DMC and since I have a huge stash of it I decided to use that.  I picked random 28 ct. linen from my stash, Antique White in this case, and stitched as directed.  I did run into difficulty since the chickens are white and I stitched on white so I changed their color to WDW Straw.  I have to say in hindsight I wish I'd picked a darker color of linen so my chickens could have been white as well.  But overall I thought it was cute and finished it as a pillow. 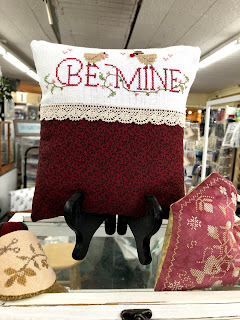 Then I moved on to "Love Stamp" and again I was going to use all DMC but didn't have the DMC bin near the sofa and since I was on a roll didn't want to go back to my stitching room so I pulled my overdyed bins out (I keep them in the living room where I sit) and grabbed GA Ruby Slippers.  I stitched this one on 28 ct. Mocha linen.  Then when I was trying to figure out how I was going to finish it I found some of the metal trays I keep in cabinets under the T.V. and it fit beautifully in the red tray.  So that was an easy finish.  And I used a favorite type of tray as well which has been waiting for 2 years for me to use it. 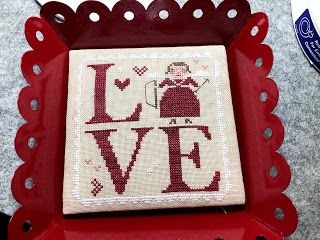 There was another design from this booklet I wanted to stitch, however I also had a sampler piece done in red that I wanted to do for some time so I switched to another Brenda Gervais project,  "L. Genders -1875 " and since it is stitched in red it's perfect for February.  Most of the piece is over 2 so that moved quickly, but part is also over 1 and slowed me down a little however, still just a few days work start to finish.  This is a small piece and a needleroll, however, as anyone who knows me at all, will tell you  I just can't have blank spaces on the inside of a needleroll or etui, I just can't.  Because it was a needleroll I added needle tags on the inside of the piece for several sizes of needle and while it's very hard to see made a button needle minder which is attached to the very left of the tags for holding a working needle.  While the original used twill tape to wrap around the piece, I didn't have any twill tape which matched in any way so I went with ribbon.  Loved stitching this piece. Because I changed the original design, I left of the number 11, I put my name and date on it. 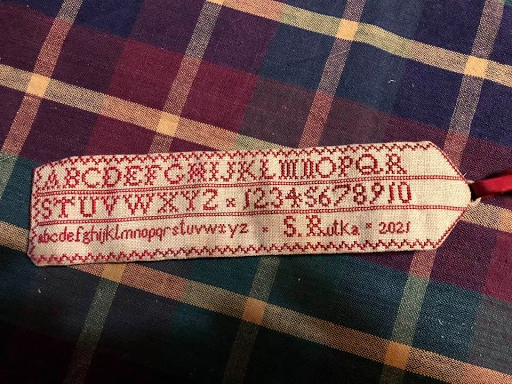 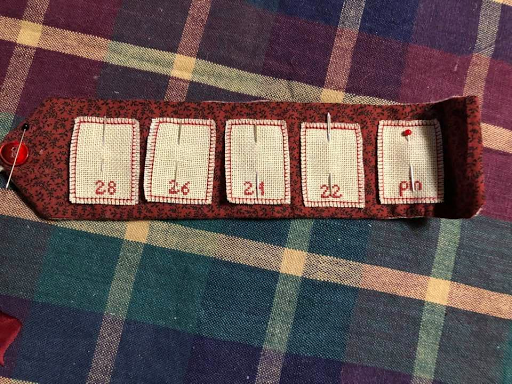 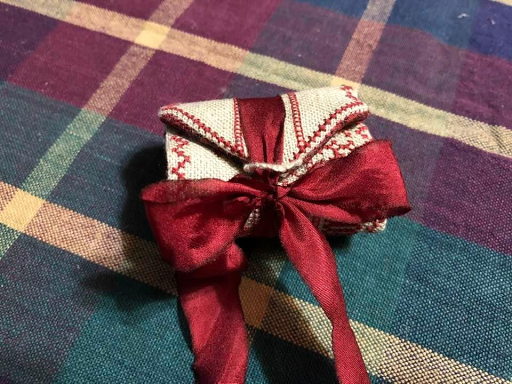 While I have  3 more pieces stitched, I can't show them yet because I haven't completed the finishing.  But I've had a fun 2 months of stitching and thrilled I'm back in the loop.  We are also working on a new website which I hope will debut in the next week or so which is why I haven't done much updating to the existing web site.  And now that I'm stitching again I'll be blogging more often and Sara has our first retreat for 2021 listed and we are preparing for that, so we are really excited about what's happening after a year of heartbreak for us all.   It will be wonderful to connect with everyone again and meet in person for a laugh and a giggle.  So stay strong, keep on stitching and posting as it was wonderful and inspiring during my difficult time to see all the beautiful pieces being stitched and finished.  You inspire me everyday and I thank you for you for that.  The Needlework Nation never lets me down.
Posted by Sally Rutka at 6:22 AM

So glad your mojo is back!! Beautiful pieces. Hope to see you sometime soon!