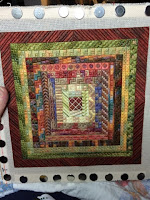 Finally finished, border and all...yea!!!!!  I just had to take a day off from the pre-stitch as it is a test to my endurance at this point.  As I said before, the colors on Autumn Log are not colors I normally work with, but I will say I loved most of the stitch.  I come from a crewel background and I do miss, on occasion, the lack of dimension I got working with crewel fibers, etc.   I had used many of the stitches before, although I swear they've changed some of the names, so it was like going home again.  I'm not used to working on stretcher bars so that was a little awkward for me, but all things considered, I'm getting ready for my next canvas work piece, only this time I'm picking the project.  Sara just got in a book with so many different stitches which shows them made into blocks and forming the American flag.  Of course done in reds whites and blues, doesn't that sound perfect?  I feel like we all have to join together this year to stop the embarrassment of the pre election smack downs, so I will be doing patriotic pieces to show I still believe in us even when grown men are acting worse than kindergarten bullies in a school yard and then wanting to become president.  Really, I'm an independent because I refuse to vote for a party, I vote for the person who has the same vision, morals and ethics as I have.  That is certainly missing from this build up to elections and certainly shows us the true ethics and morals of the people running.  I know I don't want a bully in White House calling other heads of states names, but I shall not go there today.  This election tends to depress me.  So let's move on.  As for my prestitch, well let's just say I could have done better.  From the beginning I started incorrectly and stitched going down the length of the linen instead of the width....Wrong #1...then there are 2 pieces to stitch which come together in the back and I stitched the right side on the left ....Wrong #2...which means now I have to stitch the left side on the right ...Wrong #3 (Sara said it was alright she doesn't care so I left it.)  That meant that the dates and initials that are worked into those 2 sections now have to be moved and new spots found...oh, my it might have been easier to just start over.  I have to say though, I love this piece, wrong or not, it is simply beautiful.  I was doing well with the specialty stitches until....Peruvian loop has thrown me for a loop.  I finally said, "I'm handing this off to Sara"...I mean how many times can you rip something out before you admit defeat?  And of course, I'm looking at bags full of Nashville stitching that I can't wait to get into.    So for the weekend it's in Sara's hands and after she gets that part done I'll do the accessory pieces and then I'm done all pre-stitch, until we get Betsy Morgan's.  Whew...now on to Nashville stitching.  And finally, I pray you all have the Best Day Ever, as we celebrate Easter.  Happy Easter Everyone!!!!
Posted by Sally Rutka at 7:38 AM No comments:

Finally, I'm back from the Nashville Market! 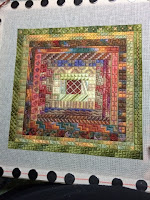