What day is it?

I have lost all concept of time, most of the time have no idea what day it is or what time it is.  When Sara called me one Saturday and asked if the mailman had been at my house yet I informed her that the mailman doesn't deliver the mail on Sunday.  As you picture her rolling her eyes and thanking God I didn't live with her she said, "Mom, first of all, it's not Sunday, it's Saturday!"  I stopped listening after that and went back to the computer.  But I really can't tell morning from the afternoon, I'm no longer getting up at the crack of dawn, which frankly I don't like because I love the crack of dawn. But I'm sure many of you are feeling the same way so just know you are certainly not alone.   You would think I would get a lot of stitching in...and that would be wishful thinking on my part.  I started out devoting a few hours a day to getting new merchandise on the Salty Yarns web site.  Organize and set goals is what I told myself.  Initially, I was putting 10 items on the Salty Yarns site per day....for about 5 days and then I got bored and that number came down quite a bit.  I was also being distracted by my living room and dining room mess.  I stitch in the living room and I had just put stuff on every chair and 2 sofas in there and in the dining room where I work on my computer, I had dropped bags on each of those chairs.  In the kitchen, the grocery bags with cans and jars in them are still sitting on the floor.   It's distracting to have so much clutter sitting around.  So I decided to clean it up..dedicating one day to each room.  I started with the living room and spent a few hours, putting everything where it belonged and then dusted (first time in 2020).  It had something on every surface, even if it is stitching related. Now everything is put away and it's relaxing when I sit there with no clutter.  In going through the totes with stitching in them I did uncover a finished little Easter bunny from about 5 years ago.  So the next day I decided to get it finished since I've also just piled my finished pieces on the table and haven't been finishing anything.  When I don't have my usual Friday deadline to get models in the shop things just fall apart here.  But here it is... 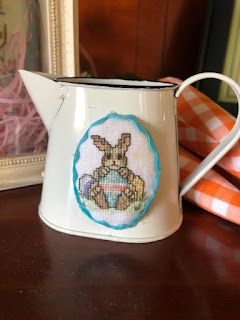 It's from the Sue Hillis "Easter Parade."  The book has the cutest Easter ornaments (there are 5 different designs in the book), and I had picked this one to insert in a pocket watch to wear.  However, that idea was from 5 years ago.  While Nashville for the needlework market in March, I picked up this cute 3" pitcher and felt I would find something to attach to it.   This project was the perfect piece.  I attached it to the picture and added the rick rack to break up the white on white and it fits right into my Easter display.  I had kitted several projects for the Nashville trip and as usual, didn't do much stitching at all.  One of those projects was Mr. Bunn E. Tail.  It is a Brenda Gervais, With Thy Needle & Thread project and since it was already kitted, I pulled it out and proceeded to stitch it.  It was an easy stitch but I was concerned about the finishing but decided to worry about that after the stitching.  A couple of nights later it was done and joined the pile on the table.  I decided to pull it off the pile and do the finishing yesterday.  I'm thrilled to say it went together very easily, especially since I used my oval templates to get the correct size oval so he could be a stand-up.  Once he was sewn together, bottom sewn on it was time for his tail, whiskers and his nose.  In the finishing instructions, Brenda tells you to use the picture for the placement of the nose, easy, glue a cotton ball soaked in a coffee solution and dried in the oven.  I had some roving so I balled it up and sewed the tail on.  While I don't mind using glue and have done it frequently, I don't do it if I can sew something.  I didn't have any sisal rope fibers, but I find that carpet thread or button thread will work well since it is stiffer than regular thread and will stand up on its own.  Mrs.  Bunn E. Tail is definitely ready to move into the shop.  One more project off the table. 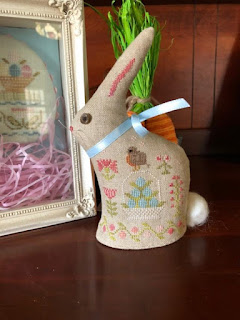 Mrs. Bunn E. Tail was worked on 36 ct. Winters Brew from R & R Reproduction and stitching using the called for fibers.  Button eye, whiskers made from carpet thread or button thread and a tail attached made out of roving.  Fun and fast project and easy finish.
Last night I also finishing the stitching on the tomato pincushion, Thank God!  That almost did me in, so now I can pick out new projects, well I already started on Erica Michaels "The Needle Berry" and I really am enjoying the stitch.  I've got a couple of band sampler projects but have to get in the shop to get the banding since the width I brought home is too wide for one and too narrow for the other.  Oh, the trials of the stitcher's life.  To add to my list of "to-dos" is the governor's order for masks as of last Saturday.  So I spent one day just watching you tubes on making masks and finally picking one, then running back and forth for supplies, ironing, cutting, etc.  It's not that hard as many of you have found.  Getting elastic is the difficult part.  So I went to my stash and found the package I knew was somewhere, along with a couple of other packages, which I didn't know I had,  so I was good to go for a few masks.  I was more concerned for the girls as they are the ones who go grocery shopping.  Then it was on to the men and the children.  After getting everyone's masks the correct size I took a break and will make a few every few days until we have a surplus.  I'm so excited to be getting rid of some of my fabric, which I keep buying even though I haven't made a quilt in years.  Well, I'm off to start something, cleaning, dishes, laundry, who knows, but I do know stitching will be done sooner rather than later.  Hope you are getting plenty of stitching in while you are home.  It won't be too much longer stitchers, but please stay home.  It's better to be safe than sorry.

Posted by Sally Rutka at 9:27 AM No comments:

But before I discuss the finish I've seen a big difference in activity in O.C.  Last week I took this picture on March 27th, which was a beautiful sunny day and I was scooting down the boardwalk to the shop to pick up supplies and encountered many people at a time we were supposed to be in quarantine, and the boardwalk is closed to everyone but Ocean City residents.  I can guarantee everyone I saw was not a resident. 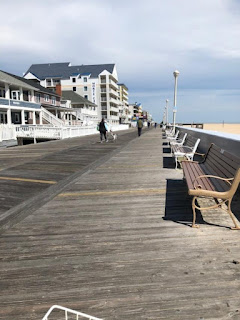 Today, when I went to the shop to drop off and pick up new charts to get on the internet, and yes, to pick up supplies for myself,  there wasn't anyone on the boards but me.  Going home I saw one woman with 2 children and that was it.  I think people are getting the message to stay put, at least I hope they are.  Salty Yarns is closed like most of the stores, even though I think we are necessary for the mental health of the stitchers, but this is an argument for another day.  Sara works in there taking orders and getting mail orders out so the stitchers don't run out of things to do.  (I say that with humor as I know most of us could be shut up indefinitely and still never run out of projects to stitch.)  Sara and I are both get a lot of stitching in, but while Sara is working on the finishing of some of her class projects, which are fabulous and she's done a wonderful job so far, I, of course, am working on models for the shop.  While I normally finish my projects after stitching them so they are delivered to the shop every Friday, with the shop closed I haven't felt the rush to do that.  So they are piled on the table...UGH and of course now I don't feel like doing the finishing.  So today I decided I had to start, as it certainly isn't going to get done if I don't start soon.  The first finish is Lucky Berry, the strawberry from Erica Michaels.  I've said it before, I'm infatuated with these berries.  I use the silk berry charts to get all the detail then stitch on linen, 28, 32, or 36.  I really would prefer to stitch on the smallest linen but lately 32 becomes my go-to just because it's easier for me to see.  I stitched Lucky on 32 ct. Platinum linen using the recommended fibers.  While you can't see the lines on the pattern, there are lines stitched with a light fiber that on my linen didn't show up so I used a light green (DMC 3347) to stitch those lines.  Other than that I used the called for fibers. 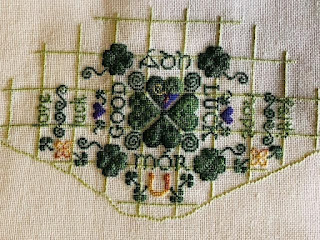 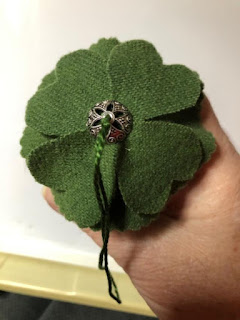 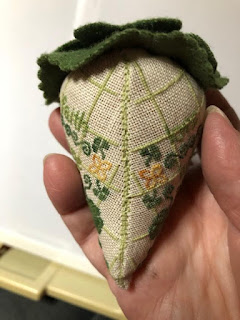 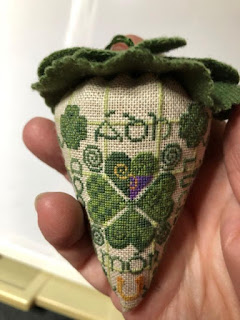 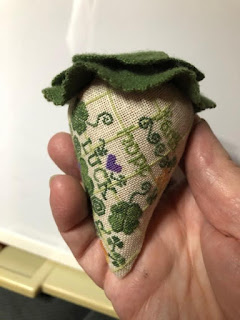 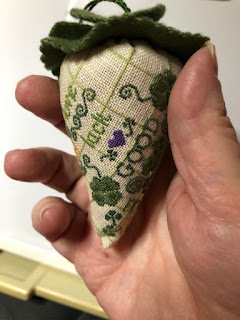 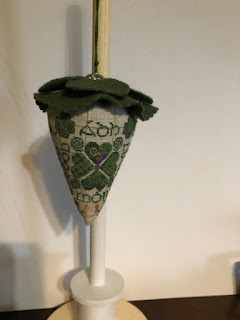 So now I'll move on to finish the next piece....Mr. Bunn E Tail, by With Thy Needle & Thread.  Hopefully, I'll get it done tomorrow.  But for today, I'm done and back to stitching.  I was trying to finish stitching the last piece of My Stitcher's Heart, the pincushion, but due to Vernon's intervention, I have had to start Liz Mathews Spring Quilt Tree.  I have a fascination for her tree series and want to stitch many of them and asked Vernon to make a base....he's done about a dozen and I've yet to stitch it, so I'm on it now but it's been a slow go so far.  Not hard, don't know what my problem is.  Hopefully tonight I'll get a run going.

Whatever happens I'll keep you posted.  There are so many projects and I have so little time to get these things done.  But I'll press forward and keep the fingers moving as quick as I can.  I know a lot of you are stitching like crazy because I see the posts.  Keep it up, you serve as an inspiration to the rest of us.  And it gives us plenty to do during this crisis.  Please stay home and stitch and don't venture out for a break.  I know it's a little hard but it could mean your life or your loved one's life so let's do this the right way so we can get through it and be able to get back to our lives.  To all the medical personnel who are risking their lives by fighting this on the front lines, Thank you for all you are doing.  I can't even imagine the pain and anguish of fighting at the front.  You are our heroes!  Stay safe everyone and I'll be talking to you tomorrow.  Keep the needle moving.