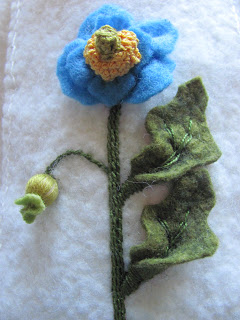 We are always excited to see our annual October Stitching event come and since we know that this is really the end of the season for us we are a little sad to see it end.  However, the older I get the more exhausted I have become by Sunday that it takes me a week to unwind and get rested.  So I've had a few days to get sleep and worked less so I'm almost feeling human again, but I have to say, it was a great event, the teachers were fabulous and the stitchers appeared to have a great time...so it was a win win for everyone.  Theresa (Shakespeare's Peddler) taught the stitchers to do a "passport pincushion" which the stitchers loved because it brought out their creative side.  A few finished theirs over the weekend and no two are ever alike, so it was interesting to see what everyone did... using "bits and bobs" of linen, lace, rick rack, buttons, charms etc.  Very cute!  Then Belinda (Blue Ribbon) taught one of her fabulous samplers, titled "Feathers, Flowers & Fruit" which included a framed sampler, a scissor fob and an ort recepticle.  Her class was wonderful and the stitchers learned some of her best tips and secrets.   Donna (By the Bay) taught the stitchers to do stumpwork and wool work in creating an eyeglass case.  Several stitchers also finished this over the weekend and took home a finished piece...Kudo's ! 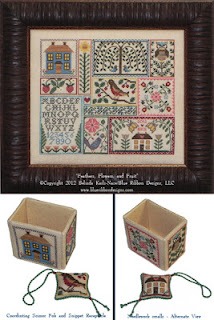 So a good time was had by all.  We had 54 stitchers, which included our very own token male...imagine 1 man and 53 women...he's a great sport and even stitched his own name tag this year (I told him he really needed one last year).  It was so cute because it had his name on he front and when he flipped it up it said Token Male.  Anyway, the weather was wonderful...cool nights but sun shining during the day so everyone could sit outside if they wanted to.  Sunday was the first exodus of stitchers with the remaining leaving on Monday except for Syd and Debbie and they pulled out on Tuesday.  But we closed the hotel part of the operation on Monday.  So now just the Salty Yarns and Sea Trader will be open everyday.  Also on Sunday our Connie worked her last day before retiring.  So I'm back on the schedule for 5 days a week.  But at least I will be taking off at least one day...I need one day in the office until Thanksgiving at which time we go to 4 days a week open.  Oh, I almost forgot, one of my favorite parts of Jamboree is seeing finished pieces that stitchers bring for show and tell, and this year was no different.  Seeing all the different projects just makes me want to go home and stitch 24/7, don't you feel the same way?  It is so inspiring, and really gets my creative juices flowing.  Oh, I had a not so creative moment today, in fact it  made me feel really stupid, I was taking my shower for work and while standing there washing my hair THE light went out.  I knew that couldn't be a good sign and mentally thought about the bill but knew I had paid it so figured they were working on it somewhere.  Fortunately I was able to finish the shower and when I looked outside saw no trucks which wasn't a good sign.  Then Brian called me to see if it was out downstairs and I said yes and told him to call DP & L.  I then walked into my bathroom, sat down and tried to blow dry my hair.  Took me a few minutes to realize I Had No Electric.  Mary called and said it was out in the south end of town (which is where I live and work)...and like an idiot I thought, no problem, I'll just take my hair dryer to work and blow dry it there....in the south end of town.  I really felt my age when I arrived at the shop which had to electricity and realized I couldn't dry it there either.  Long story short...it's amazing how much I depend on electricity.  I could have sat outside in the sun and it would have dried my hair...but you just know I'm not doing that.  Thank God he electric returned at 10:15 a.m.  And my hair was still wet, so I didn't drag my hair dryer here for nothing...horray!  Anyway, I have to start working now...Sara and I are alone in the shop today so it will be a miracle if we both live through the day.  So have a great day yourself...here it is sunny and bright with the ocean a little darker as there must be a storm somewhere, but it's so warm I think I'm going to have to turn on the a/c.  I hope you have a great day yourselves....talk to you later.
Posted by Sally Rutka at 8:05 AM 5 comments:

Posted by Sally Rutka at 7:08 AM No comments: 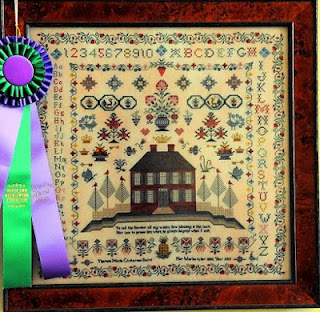 Yes, I've poking my head back up again...it's the end of the season, we're geared up and ready for the event this weekend, and Theresa from Shakespeare's Peddler, just arrived.  Stitchers  started arriving yesterday, with more coming tomorrow and the majority arriving on Friday.  The piece you see here, "A Maryland Inspiration", was delivered in time for the event, along with charts.  It's a fabulous original design by Theresa Baird and  received the Frank Lloyd Wright Award for Outstanding Original Design at the 49th Annual Woodlawn Plantation Needlework Exhibit. Fabulous!!!  We're so excited that we finally got the finished piece on display...please come in and see it.  Well, I don't know how you did over this summer, but I'm much to fat and old to put up with the heat and humidity we had down here.  I thought I'd die from it.  Believe me when I tell you I thanked God every day and night for my air conditioning.  We managed to get through the summer without killing each other or any tenants, again I thanked God for that.  We are blessed to have great tenants in the hotel, for the most part, and we are also blessed to have great stitchers in Salty Yarns.  Now that doesn't mean there aren't a few stinkers in the group, but they are far out numbered by the great ones so we don't like to complain too much.  I do have to say one thing though....and get ready because it's a rant.  I'm a person who believes in tipping for good service and great service I really acknowledge, however I also believe tipping is for service above and beyond, not for those who are simply doing their job.  For instance, I was at the Alaska Stand (a hamburger stand here) a couple of weeks ago and a gentlemen handed the owner change for the tip jar, and then he began to go on and on about people who didn't put money in the tip jar (of which I am one).  Now, when you are at a fast food place, which is what a hamburger stand is here, you can't go behind the counter and get your food off the griddle, so how are you suppose to get your food if they don't give it to you.  Therefore, that isn't anything but their job.  Now, if you kept asking for special things, changes in what ordinarily they do, or extra of anything that isn't normally given, well then maybe throw a few coins in the jar, but that's iffy to me.  Anyway, my stand on hotel tipping is...if you stay one night there is no need to tip as they didn't do anything for you.  They had to make up the room between tenants yes, but that wasn't specifically for you it's their job.  However, once  you spend two nights there is a need to say thank you for cleaning up after me.  I always police my room before room service comes in, make sure all clothes are put away, trash in trash can, etc., so they can come in and do their job, so there is no extra effort needed on their part, but they are cleaning my room for me.  Now, in Nashville there are times when I'm too pooped and they haven't gotten to my room yet I just tell them to forget it for the day (there's nothing housekeepers hate more than tenants sitting there watching them work).  When I don't have room service I don't leave anything for those days as I don't have them do anything...take out trash, replace towels, nothing.  But there are only a couple of days I don't have them come in the room so I'm still tipping for all the days they do come in.  I started this rant because someone who is a regular stayed for 3 nights and tipped with "coupons  for something off a dinner at Outback" and a couple of stamps.  First our housekeeping staff does such a wonderful job and frankly that just isn't good enough.  It borders on rude frankly.  The last time this couple was here they left her a few chocolates in a bag...again, hardly good enough for someone who has cleaned your toilet for the weekend, made your bed, cleaned up your room...etc.  Mary who runs the front desk came to me and said she was embarrassed to even give the housekeeper the coupons, etc., but was afraid not to so she did.  Needless to say the housekeeper just threw it in the trash, which is the same thing she did with the candy.  As for the candy, she wasn't asked what kind she liked...it wasn't presented in a nice box, it was a few pieces thrown in a bag.  If you don't want to tip housekeepers....stay at a camp ground and clean up after yourself,  stay home, or just ask that no housekeeping be given, which you can do.  I appreciate someone making my bed, exchanging my dirty towels for clean ones, etc...I tip for that service.  But will I leave a tip at a carryout counter...no sir...if you don't want to put my food on the counter, then open it up and I'll come and get it myself.  I think I've said enough on that subject...let's move on.    Sara and Pat worked on getting the trunk shows up and they are beautiful...wish I could keep them.  And the girls are shopping, shopping and shopping so I have to end here.  But I'll try to keep in touch since I'll be working more.  Our Connie is retiring and Sunday will be here last day.  Guess who will be picking up her shift....you guessed it...yours truly.  So I'll be in here more and I'll try to let you know what's happening.  Have a great day and a great weekend.  It is gorgeous here...sunny and cool, and we've still had to put the a/c on in Salty Yarns
Posted by Sally Rutka at 1:31 PM No comments: