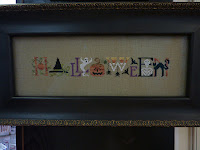 ing for Betsy's class and we're all excited. This is our second class this year, the first being the Elizabeth Talledo class which was wonderful and so cute.  A couple of our stitchers are well on their way to finishing that class.  We've gotten through two retreats, Spring Retreat and Delaware Valley Sampler Guild so we've been busy.  Last night I went to C.J.'s graduation, but had to leave before he even got his diploma since the speakers were too long winded and I had to get to the airport to pick up Paola coming in for Betsy's class and Debbie showed up today so we had a really nice homecoming after finally arriving back at the hotel around 10:30 p.m.    I'm doing my part by stitching up samples like crazy. I picked up 4 new framed pieces this month and Carolyn Newman delivered 3 pillows in May so ..wheww!!! I'm stitching like a maniac and loving every second of it. Sorry these pictures are so dark....but I just had to show you anyway. Halloween by Drawn thread was such a fun stitch. Many of you will recognize it as it was such a popular piece when it came out 2 ye 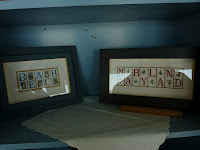 ars ago...(yes it laid around in my bag for 2 years before I finally got to it.) The second picture shows Hinzeit's Beach and Maryland with charms....cute and fast to stitch. And the final picture is Hillside Samplings "Quaker Alphabet", which I have loved for many years before stitching. As you can see I mix old charts with new charts when I stitch...I love pulling out an older chart out of my to do pile...don't you? And finally, "Scatter Luck" by Shepherd's Bush. I love their Scatter series and have stitched a couple of them, but was trying to figure out what to do with them...and in the end I do love them framed since framed you can switch them out on your walls for the different seasons, etc. Honestly, you would think that after 50 years of stitching I'd be bored, but it's like I got a second wind and I can't seem to get enough of it. Some take longer than others, and some take more thought. Like "Beach-y" Mood by Cricket Collection. I took one look at this one and knew it was going to be stitched. First, I love Cricket Collection designs, had just finished "Summer" and at the time was working on "Spring" so this went immediately into my stitching tote.  5 weeks ago it came out after I finishe 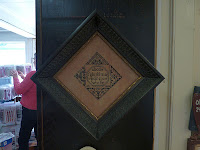 d "Spring" and took it to be framed. I knew there were a couple of things I wanted to change colorwise on this piece but I didn't realize how much trauma I would go through. I have learned if I don't like a color on something I need to change it right away as it will "bug" me forever. So I knew instantly I had to change the red crab to blue as we are a blue crab state. But the blue crab is actually a green and blue color so that was the first problem for me, which frankly got settled rather quickly by going with 2 different Weeks Dye Works colors. But then I wanted a light blue in the claws and legs as well and there had to be orange/red tip 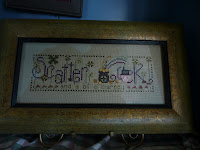 s on the pincher claws. I must have redesigned the claws 3 times before deciding to leave them the way they were designed and just change the colors. (Blue crabs don't have fat pincher claws they are more long and narrower...but then as Sara kept telling me...it's not suppose to be an exact replica..so I decided for the sake of finishing to let it go). After making that decision the crab was stitched quickly and I love the little guy. I did use beads for his eyes and he was done. Then I had to move on to the shells. Why did it make such a difference to me I don't know...perhaps it's because we run a shell store here and have for years, after all we are at the ocean. So I had Sara run down to the shop and get me shells so I could replicate the colors. Once I finally sat down and said "get your butt in gear on this so it can get to the framers) it all happened very quickly. I did drop the clam shell off the "B" and just went with the scallop because I had been traumatized enough and didn't really feel the clam shell was necessary and I was done. I hope that Cross Eyed Cricket likes my version if they see it and don't mind my "messing" with it. I love the finished product which it hanging in the shop.   My framer has done an exception job with the framing of all the pieces and so has Carolyn with the pillows.  I did the May wordplay, again as I did with April, I stitched on 18 ct. Davos over 2 threads so it's count becomes 9.  The pillow size is fabulous and will look great on my new sofa.  Anyway, I wanted to let everyone know I'm still here and kicking...no as high as before, but I'm still kicking.  The day is beautiful, sun is shining here and it's hot and humid (not my favorite, but then I'm in a/c) so life is good in Ocean City.  Hope you have a wonderful weekend....maybe next class you can join us.
Posted by Sally Rutka at 7:40 AM No comments: