Friday-Sara and I are in retreat mode for the stitchers  arriving from Maryland, Virginia, Delaware and Pennsylvania as well as Superbowl Sale mode which starts today.  Yesterday, Sara was in her usual spot, the grocery store while I chose to elude the cold weather by stitching and finishing models for February.  First up was the "Year of Celebration"-February from Hands on Design.  Such a fun fast stitch and an easy finish, although I seem to struggle to cut the Weeks Wool straight, but I do the best I can and let it fly.  In this case I used Merlot Wool and love it.  I had the heart button covers from who knows where for so long and why I ever bought them is another mystery, but finally found a use for one, only 4 more to find a home for, so count me thrilled to use something out of my older stash.  Anyway, the metal on the back of the heart, which is a casing for the button on a shirt it is suppose to cover, actually wouldn't stick to the magnet, but since the heart has the little casing that opens for the button,  I stuck a small magnet in the cover and now it sticks beautifully.  I'm having as much fun finding these charms, buttons, etc to use to decorate the hanger as everything else.  I've talked about my issue with things being balanced or odd colors together and at first when I started January's piece I was having a problem with Cathy's use of the orange to outline but I used it and once done it didn't bother me at all.  On February she also used a turquoise color which seemed so out of place on this piece, but again, I decided to go with the flow (Sara hates it when I change things) and again, it doesn't bother me once it's stitched.  Sometimes you just have to step out of your box.  At 70 years of age it's getting easier for me apparently to try new things....10 years ago I doubt I'd go with the flow.  Or maybe I'm getting too old to make decisions, who knows....I like going with the flow because it's mindless...I have no decisions to make except what to use to hang it. 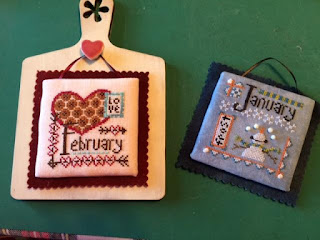 On to the next finish.  I finally got Brenda Gervais', "All Bundled Up" finished and it was no easy task.  Everything that could go wrong, well, not everything but I did have constant issues including breaking the sewing machine needle because I got excited that I was finally getting it done and I didn't pay attention when I changed to a zipper foot and didn't move the needle over.  Lesson learned again!  Anyway, the important thing here is that the piece is done.  It is the largest pillow I've stitched and finished and I wasn't really aiming for that so even though I measured it to begin with and knew it was going to be approx 18",  I guess I just didn't think about it then.  As I was working it at some point I told Sara I thought I made a mistake for stitching this on the 20 count over 2 because I could see that it was going to be bigger than I imagined, but once you are at the halfway point you don't want to give up and start again so I just plowed on.   The size however, created a problem for me with the pillow insert, however I ended up taking a pillow off the bed, took out some of the stuffing (I didn't realize it would be that difficult to do until I started the process and while I struggled with getting rid of approx. 5" of stuffing, I finally won the battle and that is what I stuffed it with.   You can get the idea of it's size as it's sitting on one of my dining room chairs.  (you can see the needlepoint seat it sits on which is one of the 6 chairs with needlepoint seats my grandmother stitched around 1940, and which I still use the set in my dining room. 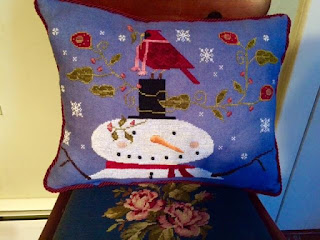 Brenda Gervais is always a  really fun stitch and allowed me to use several creative stitches.  Stitched on 20 ct. Weeks Dye Works Blue Jeans linen using WDW and DMC pearl cotton fibers.  And my final finish this week was one of Heartstring Samplery Festive Fobs-Valentine Edition.  Stitched on 32 ct. Antique White linen over 1 thread using the called for threads, these are fun to stitch and it's an easy finish although because the scissor fob is so small I do have a problem finishing those, but muddle through anyway, but I definitely need to improve that finish. 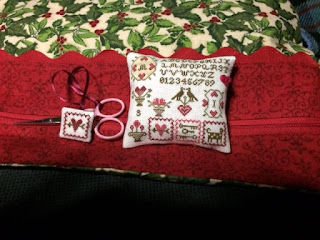 Because this is a Valentine pin cushion I decided to use my 3 grandson's initials as they are my Valentines (although Sara and Mary could also think it's for them since two of the initials match them.  In any event I decided to put the 3 names on the back so years from now people won't be wondering who the "I" stands for.  The most exciting thing this morning is I get to pick out new projects (although I might just work on the 4, which I started along with the 3 shown here.  But then again, Hands on Design latest short stack is calling to me and it is for Valentine's day so I think it should be the next to stitch.  Right now I'm off to get ready for a fun weekend with some great stitchers who will keep me entertained all weekend.  Well, regardless of my prediction that if everyone else sees snow we will see rain.....here is what we saw starting around 10:30 a.m.  This continued until 5.00 p.m.  So we weren't left out of the actual snow storm...while it wasn't exactly a snow store we did get some, perhaps around an inch, at most.   Don't you hate it when it snows and you don't get a snow day from it.  UGH...but with our stitchers in town and staying here on the property we just couldn't do it.  But it sure stopped me from going to the grocery store to get the food I'm making for our shop Superbowl party, so tomorrow better be clear and hopefully sunny so I can get there.  Now I'm one day away from prep work.  UGH!  We've had a great first day and oh the finishing I've seen today.  Unbelievable...damn I should have taken pictures.  Maybe someone will bring them back in so I can do just that.  Crap! I never remember to do that.  Have a great stitching weekend whatever the weekend.  Talk to you soon.

Posted by Sally Rutka at 6:46 AM No comments: