When last I wrote, I talked about my next project being, Hands on Design's "Apothecary Series", and I have had my issues with this series (operator error), but I have loved each finish. I've not finished the entire series yet, as you can see, but I'm hoping to finish the final 3 before next Friday and will have it hanging in the shop.  Love It.  I started with "Bitter Brew".  I had picked a fabric, but when Sara saw it she had a different one in mind so I decided to go with her decision.  Since I really felt as long as the fabric color was light all the designs would pop.  Sara picked 32 ct. Pale Lilac linen.  I pulled the Classic Colorworks fibers recommended as I was going to do it exactly as shown on the charts, however, I didn't have the called for Kreinik threads so I pulled threads that closely matched the called for colors (or I just liked them).  So I instantly decided instead of Zach Black I'd just use the DMC black as it popped more on the fabric.  After that,  I used the called for flosses for the rest of the piece.  I failed to note that I was supposed to use a specialty stitch on the bottles, and instead did the cross-stitch in Kreinik and then satin stitched over that with the Kreinik.  It really makes the bottles stand off the linen.  I also used the #4 black Kreinik to make all the spiders on the series.  Then after I finished the stitching I decided to do the finishing as well right away.  A couple at a time would be easier than doing all of them at once (I thought),  After looking at different options for finishing, I finally settled on the following for all pieces.  I cut 2 mat boards for each piece, glued scrapbook paper to the back of one piece, put a piece of batting on the front piece, attached the stitched piece to the batting mat board, cut 2 two-inch strips of the orange/black ribbon and made 2 loops for each piece which I glued to the back piece of mat board on the side that would be glued to the front mat board.  Yes I glued the two mat boards together.  Then I decided to have 2 colors in the cording and for Bitter Brew it was orange-DMC #922 and black-DMC #5 pearl cotton...3 strands of each color.  I always have the same issue with cording and that is figuring out how to join the ends without it showing.  I improved by the 6th finish, but it was a rough go.  Anyway, I was pleased with the process from start to finish.  The complete finish by the 6th piece was taking me approx. 1 hour start to finish.  In the beginning, with the first one, it took me a day because of the cording issues. The stitching took anywhere from 2 days to 2 1/2 days start to finish.  I chose to stitch on this project rather than switch on the weekend to my challenge project (Shores of Hawk Run-(I think you can see why it's not getting finished this year.) 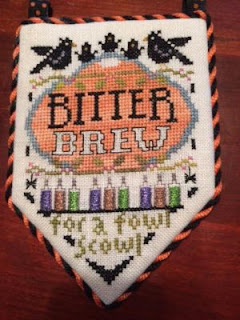 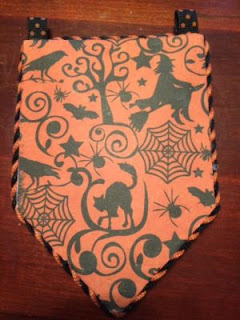 Next came, "Broom Stick," which was one of the quickest to stitch.  With the exception of Zach Black, and Frog Legs, I used the recommended colors.  Zach Black is substituted in every chart to DMC Black.  On this chart, I also substituted Frog Legs as it didn't show up as nicely on my linen so I used Hickory Sticks to highlight the broom satin stitched the part of the broom which surrounds the broom stick.  For the cording I used Weeks Gold and DMC Black. 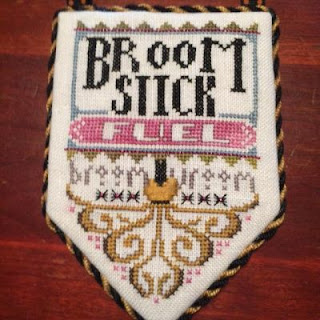 Next came "Bat Balm."  Another fast stitch and here again I didn't like the brightness of the Finley Gold and substituted Weeks Gold in its place.  For some reason, I didn't change the bat color to black and should have as they don't show up as well on the gold (they would have shown up beautifully on the Finley.  This piece is also where I began using a deep rose metal body and the bats the rose eyes.  I did change the green beside Bat Balm lettering because I didn't even look at the chart symbol and just for some reason did it in green.  Since I thought it looked O.K., I stuck with it. 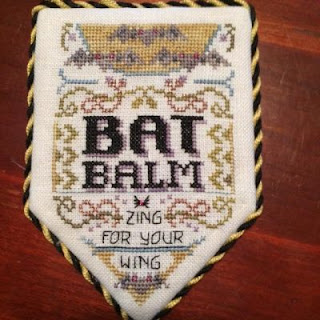 Next up-"Snail Slime."  Again, it would have been lovely if I bothered to read, instead of looking at the from of the chart because again, I didn't notice the bubbles were supposed to be a specialty stitch and I just did cross-stitch, but I loved it enough anyway to leave it.  On this finish, I used a lime green DMC #734 with the black.  During the making of the cording my cord spinner broke and I then had to finish the next two with cording done the old way with a pencil...UGH!  Sara was going to drop a new corder off on her run to the grocery store but that would be 2-3 days away and who can wait? Now, I so appreciate my little corder so much more than I ever did. 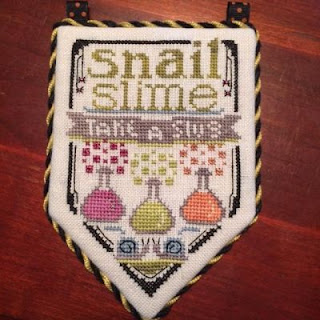 Next came "Skeleton Polish".  On this one I changed the Finley Gold on the bones to WDW White Lightening which is a gray white.  For that cording, I used DMC #3041 with Black. I was so upset about my corder during this one that when I went to cut excess cording off, I also cut the ribbon in half in one side.  Since the back was already on and the glue dried I then had to repair the ribbon loop....honestly what a moran I am.  But after driving myself crazy repairing the darn thing, I walked away and when I came back the glue was dry and the ribbon was connected. 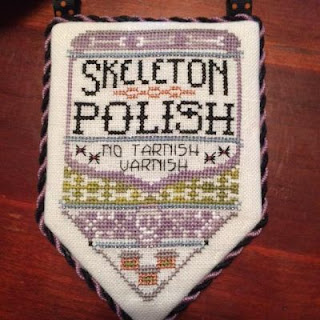 Next-"Cauldron Cleaner"-Here I did use Zach Black but for lettering and the main color on the cauldron, but used Black on the cats and darker colors associated with the cauldron.  I used the Kreinik as the orange color under and around the cauldron acting as flames.  I also left off the recommended Smyrna crosses on the cauldron and added Frog Legs satin stitch to represent whatever cooking in the cauldron is  bubbling over.  That cording is orange and black. 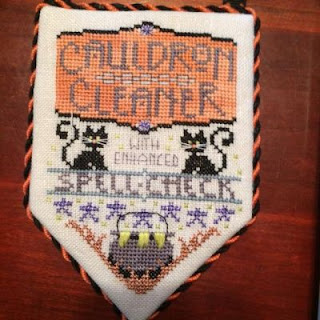 While there are 3 more designs to stitch, I wanted to show you how cute these are and how I intend to display them...as a Halloween pennant banner, with Halloween characters holding the ends of the banner.  I'm excited! 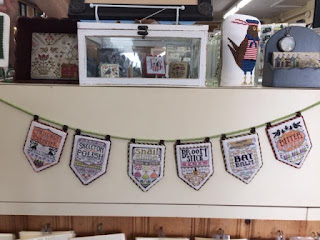 We have it temporarily up on the counter until I have it completely finished.  I'm thinking about adding something in-between each stitched design to keep them anchored, but we are still debating on whether to do it or not.  Anyway, I highly recommend this project for those of you who have Halloween on the brain.  Fun, Fun, Fun!  Can't wait to finish because my next projects are already kitted and are waiting patiently for me to get to them.  Have a great Labor Day weekend, stay safe.