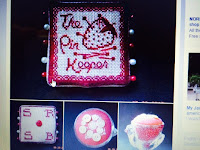 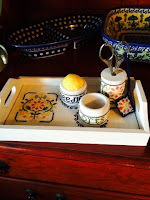 Promised you pictures of the goodies stitched for me for my birthday.   There will be more on the next blog, but today's gifts are first, from Stasi Buhrman, the Pink Keeper and my "peep" pin cushion.  I love these pieces, not only because they were stitched but because it's a tribute to my "peeps" by one of the peeps.  If you look closely you will see that the pin cushion in the bottom right corner is actually placed in a "Peep" egg cup.  I've never even see one of these "Peep"cups before so I was especially thrilled. I have a couple of  regular egg cups to make  into pin cushions, but I couldn't figure out how to put it in the egg cup so that it wasn't a red hot mess in the bottom of the cup.  Stasi solved my problem because she filled her egg cup with red beads....such a great idea.  The effect from the beads in the bottom is fabulous.  The designs for both pieces are from Blackberry Lane Designs, "Tools of the Trade."  Thanks Stasi, I have the pieces displayed on my hutch in the dining room so I can look at it while I'm working, and love them.   The right picture shows Linda Wimbrow's gift to me,  a needlework tray and 3 accessory pieces for my scissors, orts and needles.  I loved the idea of this when I saw the chart, "Tray Necessaire" from Noteworthy Needle.  I have it in my stash, of course, and am thrilled that Linda did the work so it gives me one less project.    I normally don't use my stitched items, they are on display for me to admire, but I can't help myself  with this gift because this has all the elements I normally use in stitching, a scissor keeper, ort container and a pin cushion and the tray just keeps everything organized, so yes, I'm using this gift (in fact I've been using it since I received it.  The original showed different colors being used, but Linda knew I like Navy Blue and so she made this more to my taste,  color wise.  Thanks Linda, it is perfect for me!  So ladies you both did a fabulous job of stitching, but also in picking out what to gift me.  You made me feel very special on my birthday and everyday I look at my gifts I know what special friends I have.  Thanks for all you do for me.  I hope your birthdays are as great as mine.  Tomorrow there will be more gifts shown.  I am a lucky lady
Posted by Sally Rutka at 7:41 AM 2 comments:

Stitching up a storm.... 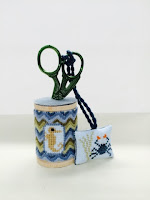 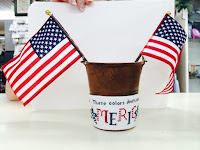 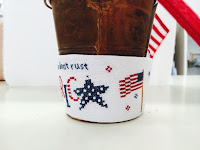 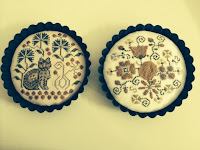 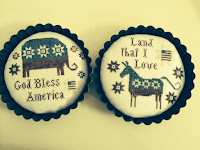 I feel like the Tart Queen after stitching 4 in a row, but I do love to stitch them....2 days tops per tart and the finish is so easy, less than an hour.....yes I'm into the tarts.  All four designs come from Plum Street Sampler.  The two on the bottom, are from the chart, "Party Tarts" and the one on the top right is "The Birthday Gift" while the one with the cat is from "Autumn Tart".   It feels great to be done with class kits for a while and having a finish so quickly just picks up my spirits.  I've even been able to work on my obsession, Serenity Harbor,  but I'll get a picture of that up later.  It may be my latest obsession but we all knew looking at the amount of water and land that has to be stitched that this would take a while and it sure is.  But my opinion does not change, it's fabulous, and will be a real show stopped once it's finished.  But I can't just stitch on my obsession, I still have shop models to do.  There hasn't been a day that I've worked in the shop that I haven't taken home more charts....good thing I only work a couple of days a week otherwise I'd be able to open a Salty Yarns annex at my house.  Anyway, today I started the "Patriotic Pail" by Noteworthy Needle.  I plan on having it finished tonight so I can start on a Patriotic Tote featuring the wooden totes I love to stitch something for.  I'm trying to get patriotic pieces done for our 4th of July display.  Well, I've got to get stitching so I'll sign off for now.  Hope your summer is starting off well.  I know some of you have had torrential rain and are suffering because of it and you remain in our prayers.  We've been lucky here in Ocean City.  Have a great day.

Posted by Sally Rutka at 9:35 AM No comments: 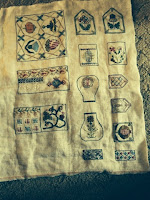 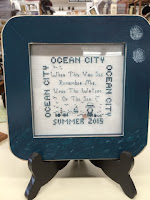 I am almost out of the woods and it feels really good!  The 1st photo shows I've finished 13 pieces and the 14th piece just involves completing one motif.... and this doesn't include the 3 pieces of pre-stitch I did so in total I had 17 pieces to stitch for this project.  Thank God I'm this close with the class on Saturday or Sunday.  So tonight I will finish this piece...and move on to other things, including Serenity Harbor...but first I have to stitch a gift and then it's on to Serenity Harbor.  Something is always coming up to drive me away from my obsession...as a matter of fact, the other day I was stitching and watching Downton Abby (I did a marathon and watched 4 seasons over the course of 3 days..whew!) when Sara called to ask what the fire trucks were doing down here.  Since I was so engrossed in my stitching, I didn't realize fire trucks were on the scene, so I said, "Gosh, I smell a strong smell of gas, perhaps that is why they are there and went out to look and when I opened my front door there were 2 policemen getting ready to knock.  Then I knew between the city ripping up the street in front of my neighbor's house and the smell of gas, well an incident occurred.  I was told I had to evacuate.  Meanwhile I'm in my p.j.'s so I said, "I'll have to get dressed then I'll get out."  One of the policemen I was familiar with as he is the father of Michael's best friend , he was explaining how they would lift the barricades so I could get my car out when I informed him I wasn't about to move and lose my parking space.  But I will tell you I did have a major concern....my stash!  Oh, My God, if I had lost my stash I'm telling you heads would roll.  I spent about 5 minutes stewing over it and trying to figure out how many bags I could drag out, when I suddenly put it in God's hands and simply took out my current project for Betsy's class and just prayed the rest would be here when I got back.  And of course, in a couple of hours the lines had been repaired, I was back on the sofa, Downton Abby back on and my stitching in hand.  But now I'm thinking I need an exit strategy.  Fortunately for me, 99% of my stitching is in the shop so I wouldn't lose it, however, every gift (there are a couple of exceptions of things in the shop) but for the most part most of what other's have given me would have been lost.  That is so frightening to me.  My gifts have become such a joy to me.  I pulled out my dough bowl and a couple of other wooden bowls and have vignettes sitting on different tables in my dining room and living room.  To be surrounded by such beautiful gifts is how I want to spend my days and I do, so to think these could be destroyed is stressful to me, but if I locked them up in a safe, well what fun is that.  I guess it's just a chance all of us take with our stitching.  I'll just pray all my "pretties" are spared.    But I must move on...the 2nd picture is the Salty Yarns annual by Renee Greene.  Mercy these have been going on since the late 80's I think.  I don't know how she keeps coming up with a new design, but they are one of the most popular mini kits we sell, so I'm thrilled she keeps them coming.  So good to have 2015 in the house.  I've also realized something else in retirement (semi-retirement)...I haven't become my parents, I've become my grandmother.  My grandmother would sit on the front porch of the hotel in the heat of the day, 80's or 90's with her cable knit Irish sweater buttoned up and complain about the cold weather.  She was not a little woman, but for some reason was always cold no matter how hot it was.  The other day as I was sitting in my living room stitching wondering why they kept talking about rising temperatures yet I didn't need my a/c on.  It was in the 80's last week, sunny, hot, and yet I didn't need my a/c.  Last year it was on from May through August all day and night...never turned off.  So to now be in June and still no a/c....I've finally become my grandmother.  While I'm not wearing a cable knit sweater, I'm not hot.  That's a good thing...I hate a/c.  I'm just wondering how far into the summer I can last....it would be so sweet not to have to turn the blasted things on. I can't stand the feeling of being cooped up.  So this year will could be a first for me...no a/c at home.  Take That Delmarva Power! Although the last time we all conserved so well they raised the rates because they weren't making enough apparently.  So not using the a/c could be a double edged sword.  Well, got to get back to stitching....my shoulders and back may be killing me at this point and my rear end could use a break from sitting, but my fingers are still willing to do the work.
Posted by Sally Rutka at 1:52 PM No comments: