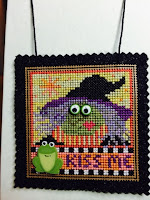 Another Halloween ornament.  I'm really getting in the hang of stitching on perforated paper and not pulling so hard I tear it.  It took a little getting use to with the stitching of all the background....definitely don't have to do that on linen, but these are fast enough and small enough it's not proving to be too much of a problem.  This is Val's Stuff Spook of the Month, for June..."Kiss Me."  The chart comes with the specialty buttons, perforated paper, the backing, and the cording.  You just supply the Weeks Dye Works or DMC and you are ready to go.  They take on a personality once you put their eyes on.  I'm kind of lovin' the stitch.  Three down and 5 more to catch up on.  Speaking of catching up, Serenity Harbor has now had to take a back seat to Jackie's class project.  She will be here next month and I'm struggling with this one.  I thought the spiral flowers would hang me up, but they are quite easy just tedious.  The leaves threw me for a loop but I took it into work and asked Sara just to show me.  She got on You Tube and 3 seconds later I was stitching them with no problem.  The problem for me is there is no relief, no easy part since the entire project are the flowers and the leaves.  So I really have to concentrate on this for a couple of weeks to make sure it's done in time.  I've also been working more in the shop this past week due to a health crisis for one of the ladies.  Actually it isn't her health crisis as it is her husbands,  as he is the one who got the diagnosis.  So please keep Judy Brunclik and her family in your prayers as they go on the warpath with the big C.  Needless to say she will be out of the shop as she helps him get to his appointments and gives him much needed support as they travel down this road.  You would think with added time in the shop I would get a lot of stitching done.  Wrong, I barely pick up a needle when I'm there.  Don't know why that is, but I believe it's the constant interruption that makes me feel it's not worth it to get everything out, start to stitch and after 2 stitches have to stop to do my job. (jobs so often get in the way of pleasure, don't they?)  We have a few stitchers staying at the hotel this week.  Betsy Cole and her niece Sara decided to have a stitch in and since Julia Whitesel was in town they invited her over to stitch in the lobby.  Glad to know someone is stitching here.  We are expecting a load of new designs and "things" in next week from the on-line show....can't wait!  It's so exciting....a lot of designs, some specialty kits...oh, I know I'll be going through the racks  for more stash.  At this point I start searching for Christmas gifts to make.  I've already got one in the bag to start as soon as Jamboree is over.  I've already got 2 to stitch for that....oh,my God, my work is never done.   I need to get busy.  Have a great week...hope your needles are moving.
Posted by Sally Rutka at 3:39 AM No comments: 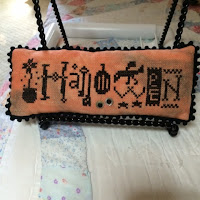 Thank you Diane Austin for the stitching, and for starting my thinking and stitching for Halloween.  This has always been a fun event to stitch for, at lease for me.  I love a lot of the Halloween designs and the stitching is always fun and funky.  But in this case, it was simply a finish as Diane did all the hard word, the stitching.  Diane didn't like the fabric she chose which is a Picture This Plus overdyed fabric, and a really popular fabric choice for Halloween projects.  But after stitching she asked Sara is she would want it for a sampler as she was going to restitch it on a different fabric and Sara and I have the same philosophy, "My Names Jimmy, I'll take all you give me."  So then Sara handed it over to me and asked if I would make it into the mini pillow pin cushion.  While this whole process has taken months, I finally sat down and got it done.   I used Dames of the Needle Pom Pom trim in black to showcase it  and this is a cute little pin cushion.  Looks a little wonky in the photo but isn't wonky in person, although wonky makes it even better for Halloween, now that I think about it.  Anyway, 2 finishes (I'm taking credit for Diane's even though I didn't stitch it)  and you know what that means.  I get to pick another new project, although today I have to start Jackie Duplessis "The Gift" for class next month.  I did pull out another of Val's Halloween ornaments to take to work.  I have to have small projects while at work since I have the attention span of a gnat at this point and too much activity and I can't function enough to stay on track with stitching.  Small Projects while working is better.  Of course, normally all my projects get when I'm working is a pleasant trip to the shop and a fast trip home at the end of the shift..  I hate even going outside at this point.  The heat and humidity are deadly to "fat" people and old people and since I fit into the 2 categories I figure I'm in twice the trouble out.  Thank God I have a/c at the shop and home.   Well, I've got to get ready to go, so I'll end here.  Have a great day and perhaps I'll have something to talk about tomorrow.
Posted by Sally Rutka at 10:17 AM No comments: 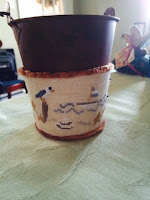 It's been a busy couple of weeks as I've been trying to catch up on a couple of things started back in May.  Those of you who attended the May retreat will remember part of your goodie bag was the Mermaid's 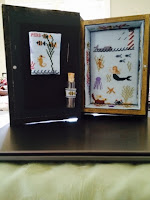 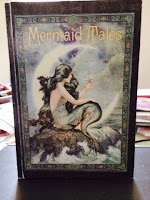 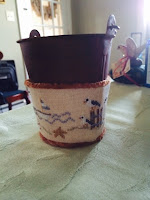 Treasure box, and while I had some of it finished, well, I fell short on the sides of the box and the needlebook.  But it's all finished now and ready to show.  Sara ordered more boxes so we could actually sell the kits in the shop.  Anyway, thrilled to have this finished.  Of course things went too smoothly so I just couldn't help myself and decided I didn't want the inside lid blank, but space was restricted as you had to make sure the magnetic closure didn't get covered.  We were looking at it in the shop and I was struggling with what to do when it occurred to me that everything should be attached to the box.  So I added earth magnets inside the needlebook and on the back of the needle vial and voila, with the magnetic sheet applied to the inside lid the needlebook and vial are now able to rest on the lid and because I made sure they fit inside the opening of the box when the lid is closed, everything worked out perfectly.  In the end the magnetic sheet was not quite strong enough so I also glued earth magnets on the sheet to hold the book and the vial.  But the sheet holds individual needles or a needle nanny so I'm still glad I put it on.  But so busy trying to figure this out it never occurred to me that the magnet on the back of the vial band would also attract the needles.  When I went to put them in the vial the magnet pulled them out of the hand and into the vial, but to get them out I actually have to take the vial out of the band.  Hummm design flaw to say the least, but I can get the vial out of it's band easily so I'm still good to go.  Then yesterday I decided to stitch the last of our Rusty Bucket Series designs (the other 2, Patriotic Pail and Bunny Pail are already done).  These are fast projects so I got it stitched yesterday and waited until today to put it together with the pail.  I then finished it with Dames of the Needle chenille trim.  Fun project and when I get to the shop tomorrow I'll be filling it with shells for display.   Since I was finishing I decided to finish Lizzie Kate's Halloween pillow from 2014.  I can't take credit for the stitching (although I originally had it in my stash) but I can say Thank You to Diane Austin who stitched it, decided she didn't like the fabric and gave it to us to use.  Sorry she had to restitch but thrilled to have a model I didn't have to stitch.   Win Win!!!  Hopefully I will be able to show this tomorrow.  Good day at home. 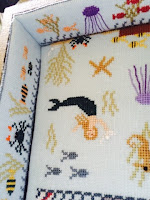 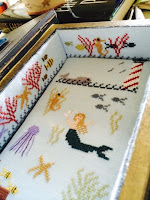 Posted by Sally Rutka at 2:32 PM No comments: