Why am I never ready for Christmas? This blog never got posted so it's outdated but I'm posting it anyway.

Today, 12/17, is the last day we are open until after Christmas at which time we will open Friday, 12/28 through Monday until the middle of April when we go to regular 7 days a week.
Every year I think I'll be ready, and yet here we are just a week out and I'm still in a frenzy.  It's not like it crept up on me...I was complaining about stores having Christmas decorations out before Halloween, so how does this happen year after year.  Plus as the children have gotten past the little kid age, gifts are harder to find.  Two of my grandchildren still don't know what they want.  Exactly how do I shop for that?  One only wants money....I hate that and when I said to Michael, "How are you going to feel on Christmas if I just hand you an envelope with money in it?"  And he said, "Oh, I thought you would give me other stuff too."  Alrighty...got it.  Mary has no list, they are going to Disneyworld in February for Izi's birthday so she wants money.  Sweet Jesus, I'm baffled.  On the plus side I've been cleaning the house so that should be ready.  I mean a hard clean too so that's a good thing.  However, I've been out of the stitching mood for a few weeks now so I've done very little.  However, I did start Brenda Gervais, Candy Cane Wishes and that seems to have kicked me back into it.  I love her small boxes and have managed to stitch every one of them at this point. 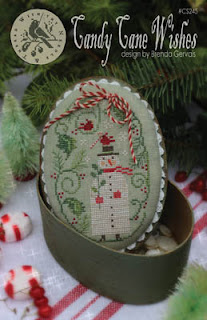 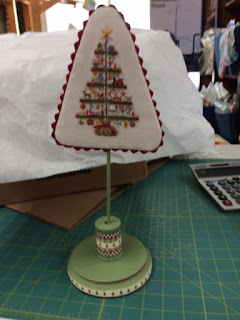 So much fun to stitch, but I ran into a bit of trouble with it.  Life would be so easy if I just stitched things the way they were shown on the charts, but noooo...I have to use colors I like and in this particular chart, I didn't understand something so I made a decision to replace those items which I already stitched so that mean I had to rip out and redo.  Because there were several of them on this  tree that meant more than one revision, plus I didn't do it immediately I waited until after I had already stitched quite a bit of the tree so then I had to replace them with things that fir in their space.  It's like cutting off the table leg.  I'd think a branch was done but after adding something on one side I'd think I'd need to add something more to the other side and this happened over and over again.  But let me say, These trees are fabulous that Marie designs, so far I've done the Freedom Tree, Halloween Tree and now Christmas tree.  I've also managed to do bases that go with the trees.  Just paint and scrapbook paper and a cute gift.  Stitched on 32 ct. linen using DMC.  Easy to stitch when you stay on the reservation, easy to finish and you can finish as an ornament as well.  During Tangles retreat, Vera Means was in and brought her show and tell, which was fabulous so I wanted to show that to you.    The first picture shows 3 of Nancy Ree's, Needle Delights,  canvaswork Halloween pictures which Vera then combined  into a triplex.  Then Vera added a few embellishments to the overall piece.  For those coming to Salty Yarns in 2019, Vera kindly allowed us to keep it until next October 2019, so you can see it in the Halloween room. 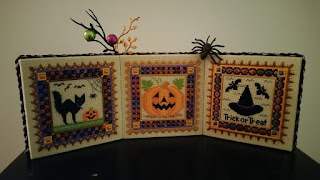 The next picture shows her Christmas Village which Vera stitched as one piece and then found the perfect frame for it.  This we don't have on display so enjoy it here.  The Tangles retreat ladies come twice a year and spend a lot of time in the shop so we thank the attendees for allowing us to share the weekend with them.  Always a fun time.  Also thanks to Judy and Kathy who were here to help me while Sara sunbaths in Jamaica.  I couldn't do it without Judy and Kathy.  They do all the heavy lifting while I just sit in Sea Trader and talk to the attendees. 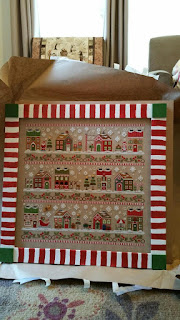 Some of you will already have seen the pictures of our Stitch 'n Bitch Christmas dinner which we have every December at Fager's Island Restaurant.  This we year we had a record of number of  attendees and it was a wonderful full night of goodie bags, I swear I took home an endless supply of goodie bags filled with wonderful treats and I also was gifted many fabulous gifts by the ladies.  I have to thank Judy and Debbie who tried to keep me straight all night, but I have to admit I was a bit over served, but had a wonderful time on Tuesday going through all the goodie bags (I'm telling you almost every stitcher who comes brings a goodie bag for everyone..amazing).  I'm posting this since it's already past due.  Have a safe and fun night tonight as you celebrate New Year's Eve.  I'm taking my normal position for this night....on the sofa with a cold soda and my T.V.