Hello Thanksgiving....we're waiting for you!

I'm sorry to see Halloween over, it's such a fun time not only with events, but also with stitching.  Some of my favorite stitches have been Halloween pieces.  So when it came time to change the front display to Thanksgiving I was questioning my stitching.  Can't remember anything, with the exception of the Drawn Thread's  "Give Thanks" that I did last year, I think it was last year.  It was a marvelous stitch and so much fun with the great variety of stitches involved.  And a turkey, well I hadn't stitched a turkey in forever (when that is I don't really know).  Anyway, I went on the hunt for a cute turkey and I found one with a company I used to love....Artists Collection.  You don't hear about them anymore because they don't design for cross stitch any longer, but I found some of their designs on our racks and with "The Gleaning Season" came a turkey, which when done on 18 ct. ends up around 3" x 5".  I used their recommended colors except (and you knew I had an accept) I loved Weeks Dye Works Rust (Pearl Cotton) for the body of the turkey.  I then did all the backstitching on the feathers with Weeks regular overdyed floss (rust).  Oh, yea, I also covered the DMC black stitching on the hat with Pearl Cotton black in a satin stitch to make it stand out and give more dimension.  And then I added 2 beads for the eyes.  He is so cute and such a wonderful addition to our Thanksgiving display.  So if you need a turkey just give us a call...we have approx. 4 leaflets still in stock (and we can't get them again so this is it.) 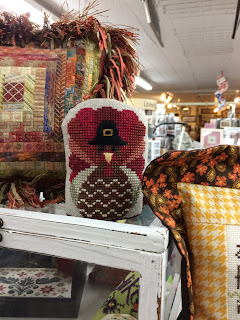 I was going to try to get a few new pieces done for Thanksgiving, but Christmas is starting to work on me so I decided I better get to it.  I did 5 more sleds from Sue Hillis, Christmas for the Stitcher, but I didn't take the correct number of sleds home so I was only able to get 2 sleds painted.   I'm taking the rest home tonight so hopefully I'll have something to show by the end of the week.  But they are so much fun to stitch and while I usually stay close to what she charts, I was able to put my little spin on a couple of them.  So important that I get to add a little something. 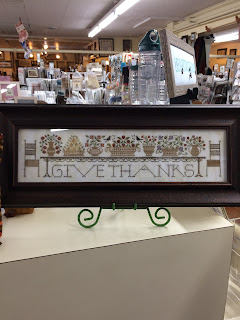 And then it's on to Christmas stitching....oh, what to stitch, what to stitch.  Or perhaps I'll find something that involves no stitching.  I haven't a clue but I'll sure let you know what I'm doing sooner or later.  Have a great week.  Talk to you soon

Posted by Sally Rutka at 6:24 AM No comments:

It took days and Judy and Mary's help, but I'm finally up and blogging again.

God, it's been such a struggle....my I-Pad wouldn't charge so I've been without my I-Pad in the bathroom so I was so behind on what's happening on facebook, but today I'm back up to speed.  I still don't have my I-Pad as it won't keep a charge, but Sara gave me Michael's 2016 Christmas gift, Amazon's Fire tablet which he apparently didn't even take out of the box, so I'm back to facebook and after Judy spent the day working on getting me back to blogging I was almost there and after I came home Mary came down and finished the job, so here I am blogging and showing finishes.  Actually there wasn't that much to show as you can see.  I did finish Lone Elm's "Sweet Fragrance" so I could use the pipe box which just arrived in the shop...which I love, love, love.  The box comes in a couple of colors and there are 2 books so far with the pattern you see and then another with a sampler as the theme.  Along with the piece for the box, you also get the needlebook design.  I will confess that I did add the needlepage to the needlebook as I'm not sure where you would put the needles otherwise, but no big deal there.     I will tell you Lone Elm does give you the foam core board for finishing cut to size so that was a plus.  All in all a great project.  I even used the colors, etc called for but I'm sure I didn't use the fabric they called for as I pulled something out of my stash....and I match what the picture looks like to the fabric and use the correct count but exact color I don't care about.  In my house close counts. 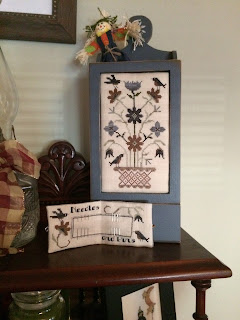 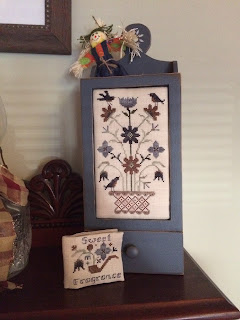 The C.A Wells Memorial Weekend was the usual success.  There were fabulous goodie bags, I think everyone brought one to hand out and the food....oh, the food...for two days it's just eat, eat, eat, and we did get stitching done.  I was thrilled to get 46 stitches in, yes that's all because I'm talking most of the time.  But Candi finished her Milady's Needle spool project from Jamboree, and she got the Sue Hillis project done at Jamboree and she finished her gold project after Jamboree so that is three classes and 3 projects done.  Go Candi.  Judy worked the shop all weekend so that Sara and Debbie could work on their Jackie DuPlessis "The Princess and the Pea" which after 12 hours of intense labor is almost finished.  I'm so proud of them.  There were moments when I thought one or both were going to give up, but they perservered and Sunday by 4 were done with the paper work and leaves, boxes were painted and they have the easy part left, the stitching.  Kay spent the weekend knitting as she had neck issues which kept her from bending her neck.  Everyone else kept busy on their current projects and then I showed them my latest so several of them got their supplies for the same project so it's a group project, somewhat.  It's called "Abc de la Brodeuse" by Jardin Prive.   are stitching it over one on a 27/29 banding and it's really too cute for words.  I'll give you a glance as soon as I finish what I'm calling the first section A-C.  I'm loving this.