After researching 3 different systems, I finally decided to pick one and get on with it.  I am happy to report we have a new POS system in place.  It's fairly simple, once you make your decision.  There's no waiting for something to come in the mail, you just pick a plan based on the number of registers or stores and start learning your system.  First I got a trial copy and played with it for a couple of days, however, I hate trials and just want to get on with it, so I decided to stop playing around and just get it.  First, you pay by the month and if you don't like it you can just cancel it.  And even after loading the product you can still upload it to a new system easily...so I signed on with the new system last Thursday and Judy was using the sell part of it by Saturday and Sara started on Sunday.  We have  Elaine, Sara, Judy, Pat and myself all loading inventory in it.  And may I say, how things have changed since my first and only POS previously. First, the POS I had for 20 years cost me a total of $81.00 plus cost of the equipment which came to less than $500.  Todays POS system can cost anywhere from a few Thousand a year to several Thousand a year.  I figure after 20 years of  no monthly payments I couldn't complain, and frankly with my new system I didn't buy one new piece of equipment.  Some of the systems said I'd have to purchase equipment but the POS I picked said to try my old equipment with it and see if it would work and thank God it did.  The cash drawer didn't open right away but our Judy knew just what to do.  (she solves all our technical issues now)    Because these are cloud based POS systems today, you can work on them from anywhere.  I've been working on adding inventory from home, and Saturday night I was in Pennsylvania taking Solomon to Camp Woodward, and at night in the hotel loaded inventory there.  Judy e-mailed me Saturday to say she had worked on it at her house (she wasn't even at work and still was working on the POS on her own time, God Bless our Judy) and was busy writing instructions for anyone else loading inventory, etc.  giving tips and short cuts.  At any time we can have multiple people working on the POS.  I was in the office adding inventory, Judy was in the shop, Elaine was in the Shell Stocked...all systems were on hyperdrive.  Anyway, it didn't take Judy 24 hours before she was fully using it to ring up sales.  I'm leaving the old POS up as well until we are fully loaded so the foreign students working don't have to figure out what's going on.  Trying to explain what's happening to them is just too much trouble.  But I did want to thank everyone for their prayers for our sanity.  We needed your help to get us over the initial "oh crap" moments and we now can see the light at the end of the tunnel (don't even think about an on coming train!)  We're working like beavers, have a lot of inventory to get in the system but by the end of summer we should be all set, since I don't think you ever get every single thing in.  But even at this point we have just about all the new inventory from January thru June loaded and I've been working on loading pre-2016.  There's been a lot of advancement in POS systems and it's fun to learn new ways of entering inventory that are more efficient than our last POS.  I also love working on it without having to be in the shop.  That makes me feel like I'm still helping out.  I'm also in charge of reading how to do things so Sara doesn't have to and then I just show her how it's done.  We haven't had to call the company once.  Between Judy and I we are figuring it out.   So, we're certainly back in action (not that we weren't before), not as frustrated as we were a month ago and we are functional.  Thanks to Judy who has worked on it non stop like she was being paid as a tech (and we all know she isn't paid anywhere near what a tech would get paid), so Thanks Judy for hanging in there and helping us get back on track.  Now that we are getting this straightened out I can get back to the web site which was updated the first the month so it went out of wack in places, and I couldn't even get into the site to change anything without calling Julie (the tech for that site).  But I've slowly been trying to get that worked out (God it never rains but it pours).  Just know we are working on things and will be back to normal soon.  Thanks again for hanging in there with us.
Posted by Sally Rutka at 1:14 PM No comments:

OMG....can this week get any worse?

I came to the hotel on Wednesday to find that our computers had a major attack and our tech people would have to take the main computer from the hotel and from Salty Yarns back to their offices.    OMG, both shop and hotel work off computers, our reservation system is computer generated, no computer, no way to handle rooms, reserved or in house.  And Salty Yarns means we can only do sales the old way, hand written receipts.  Needless to say with the problems we've had over the course of the winter with Salty Yarns computer (which Judy figured out a month ago the problem was there were 2 different data bases being used...crap...but she refigured things out so everything was almost O.K.) this is the last straw.  Yesterday Sara called me to say we needed a new POS system for the shop.  Apparently, while we do not have the hotel system back up and running the techs could get it back (we're hoping for today), Salty Yarns computer is fine but the POS can't be recovered.  Now I'm hunting for a new POS system.  I started the hunt before all this happened as our system is out of date, but now it's urgent and that brings on a whole other level of anxiety.  Anyway, we are scrambling down here....poor Mary is about to have a stroke with no reservation system in play, but I just keep saying the same thing, "Just thank God this didn't happen in July or August."  Somehow I don't think they are finding this very comforting.  But I hanging on to that and spending hours researching systems...(in college research was my forte, however, when it's urgent it's no fun).  Anyway, if you call or come into the shop and ask a question which requires a computer search of inventory....well we're back to paper and foot work so it won't be fast, but we will get there eventually.  But the thought of reloading all this inventory one at a time again is just exhausting to even thing about.  But with Judy, Sara and myself doing it perhaps it won't take more than a few months (OMG...just to read that sends shivers down my spine).  Wish us luck!
Posted by Sally Rutka at 7:42 AM 1 comment: 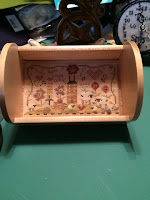 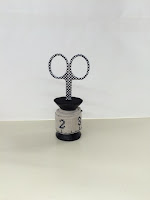 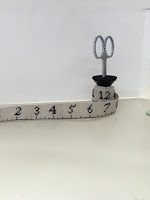 Shepherd's Bush.   "Busy bees stitching tray"-  such a fast fun stitch.  I love these trays and have done a couple of them.  I usually put a piece of Weeks Wool under the piece to add a pop of color since the stitched piece, doesn't actually fill the space, but decided to try without the wool.  I'm unsure and still may put a piece of wool under the design, but either way I think it turned out so cute.  The tray is from Doodlin' Around Designs and has a bee skep on each end.  Too cute!  The next design is "Measure Twice" from Needlework Press.  The chart comes with the spool and the linen band.  I decided since the numbers were in black the spool should also be black so in my brilliance I choose the most humid day with intermittent rain to spray paint my items...Needless to say, not the best job ever, however, with the spools it wasn't a big deal since most of the spool is covered.  Anyway, in the directions, you are told if you follow the chart only, the end result will not be an actual yard, but just under a yard.  Since I wanted it to be accurate, I decided to take the time to use a tape measure and make sure each inch marking was correct.  It does take a little longer, but worth the effort.  Other than that this is easy to stitch and easy to finish.  I did want to put a backing on the tape, but after trying to back it will ribbon I didn't like how thick it looked on the spool so I never backed it.  Still like it though and then the 3rd piece is "Stitch in Time"  also by Needlework Press.  When I saw this in Nashville I thought, at first, it was for a working clock, and was disappointed that it wasn't.  In the back of my mind I always thought I would do it as a working clock, but as soon as I saw Tracy Doverspikes I could put it off no longer.  Actually Tracy stitched the hands, but she painted the silver clock black and it changes the piece drastically to me.  (We carry the clock base in the shop) So I choose to paint this along with the spools...finish is questionable at best but still as my mother always said, "You can't see it on a trotting horse," so if you see this in the shop on display, please trot by so you don't notice the imperfect paint job.  While the chart calls for black and gray, I didn't have the correct GA grey nearby and so I just used a grey I had near me (you know I hate to get up) and stitched away.  It's a one night stitch....love that.  But when I got to the flower I just couldn't stitch it in grey and black so I chose Baked Apple and Black for the flower and Moss for the stem.  Also putting this together wasn't that hard.  I got the clock works at Michaels.  They had a small set of hands which weren't fancy and the set you see here.  The problem is, of course, I likes the fancy hands but they were way too long.  I solved that by cutting down the hands so they fit.  I did have to fiddle a bit to get the hands secure but it wasn't that big a deal either.  I love my working clock!  Too cute.  And I got a new tool to do it, a circle cutter that cuts paper, fabric and mat board....winner! 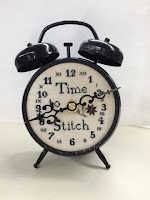 Posted by Sally Rutka at 9:03 AM No comments: