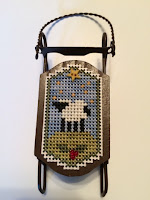 So cute, fun to stitch and a breeze to finish.  A must do for Christmas.  I'm celebrating Christmas in July by stitching Shepherd's Bush, "Noel Sheep Sled".  I'm trying to get back to my stitching and putting aside working on the POS every minute of the day.  I'm restitching (gave the first one as a gift) the tape measure from Needlework Press and while it's no big deal, I've stitched it once already so not really thrilled to have to do it again, but Sara loves it so that's reason enough.  While it isn't a hard stitch, to get it to truly measure a yard you need to measure yourself as you go along because according to the directions they assumed they measured correctly and just counted threads from the first inch.  And it doesn't work that way apparently , so you have to measure each quarter inch, half inch and inch as you stitch.  Not a big deal, just time consuming.  But I'm on inch 27 so I'm almost done and hopefully today will be the end of it.  Since it's an easy finish I'm not dreading that part.  Then I finished Part 1 of the latest Lizzie Kate Halloween Mystery Sampler.  Not a hard stitch either, and Part 2 just arrived last week in the shop so I'm moving on to Part 2.  But last night as I was sitting on the sofa I wanted to start something new and fast.  Fortunately when I was working on getting the Shepherd's Bush kits into the new POS I ran across the Noel Sheep Sled (along with 4 other kits that came home with me) and knew I had to stitch it.  It really is a fast stitch, thank God, I needed that.  But....why is there always a but for me...they didn't fill in the sky or background (I made it a sky because you put stars on it) and just left the perforated paper showing.  I know it's alright to do that but the design calls for stars in the sky which I really  felt needed a dark background.  At first I used a dark blue, navy, to resemble night sky, but you couldn't see the sheeps legs well enough so then I tried Americana blue, but again too dark.  When I tried Week's Sky and I think that did the trick.  I really think it's cute and Shepherd's Bush put a cute tag in with the kit for you to use as a hanger so you didn't have to purchase a sled, but I intend to use it for a 2nd ornament..nothing will go to waste here.  Anyway,  cute, fast and perfect for a secret santa gift.  Update on the web site, well, it's not good.  The designer doesn't seem to be able to make the corrections I want made, which they have always done in the past after they upgrade and when she passed along the  message from the person she gave the job to, I said that's it...I'm moving on (what I asked them to do is page the What's New or Just Arrived so as each new item is added it doesn't drop off the previous items into the catalog but just adds pages so you can go back easily to look at something there you saw a month ago for instance.  The person who was asked by Julie to do that sent back a message basically saying "NO because those pieces on pages wouldn't be new."  Like that's their call?   So while I'm still using the web site, I'm also working on a new one that will replace it.  My life has not become easier and retirement is definitely off the table.  But at least I am back to stitching so there is still fun to be had.  Hope you are also finding time in this heat.  Actually the only place to be is at home, in the a/c with a cold drink (tea) and stitching.   Yes, the perfect day!  Or visiting your local needlework shop to find more stuff to work on.  Have a great day Stitchings.  Talk to you soon.
Posted by Sally Rutka at 9:01 AM No comments: 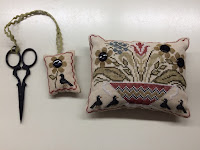