Theodore has made his way to the shop....

Well, it's been a productive week, starting with the finishing of Theodore.  Yes, stitchers, I finally got off the sofa and just took the time to do the finish and I have to say, it wasn't as bad as I thought it would be.  Knowing I can barely stitch a straight line with my machine, I decided to stitch the head front and back together by hand and continued until I got to the arm and then switched to the machine and sewed the sides using it.  I encountered no problems with this at this point.  According to the directions, you whip stitch the bottom together, however, I wanted Theodore to be a stand up so I cut a piece of mat board in an oval which would fit in the bottom and then proceded to cover it with the same fabric I used for the pocket on the back and bam, stand up done.  And the best part is he does stand up.  I filled him with the favorite, lizard litter and sewed the bottom on and sat him on the table and patted myself on the back.  However 2 hours later I noticed his neck wobbling.  In fact he was looking down at the table, as the litter had settled and now he couldn't hold his head up.  Crap!  I knew this was going too smoothly.  So after cursing for 1/2 hour and saying I wasn't going to do anything about it, I finally couldn't stand it any longer, took the bottom back off and filled his head 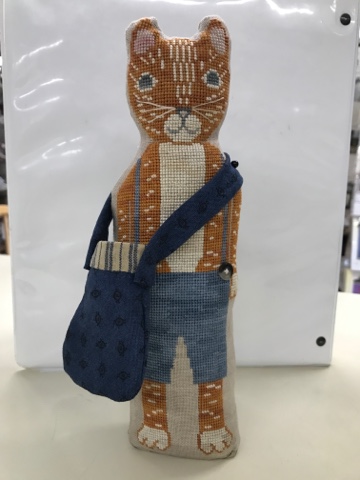 with the litter (I wanted his ears filled) and then I started with the fiberfil and filled his neck and part of his body, then put in more litter so he would not be top heavy and fall over and then filled the rest with poly fil.  Perfect or as near perfect as I'll ever get.  I absolutely adore him. 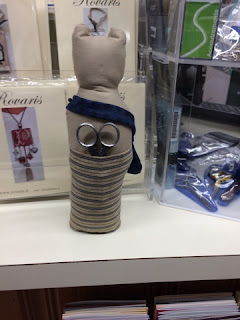 The back shows the scissor pocket.  Stacy does give good directions for the finishing of this piece unless you decide to make changes (like turning it into a stand up)  and in that case you are on your own for the changes.  Can't wait to start Clementine.  Then I started the thimble bag which hangs on his shoulder.  This was machine sewn completely.  She whip stitched the sash together I assume so she didn't have to turn it, but I don't mind turning as long as I can get a safety pin in it.  Then I did the pouch....and here was the hardest part for me.  It's really very simple, you just put right sides together on 2 pieces of the blue fabric, and 2 pieces of the striped fabric and then put the four pieces together and sew it.  However, apparently the light or my eyes were a little tired and when I turned everything out, the bag was lined only I had put one of the lining pieces in backwards so it was a back and a front together and therefore one side of the lining is inside out.  I started to take it apart when I remembered I was so sure of this I had already cut the groves in the bottom so it would be impossible for me to redo this and so it would mean starting it over.  After redoing the cat, I was in no mood so I have the correct side facing out and the side with the lining trim backwards on the back.  When I went to show Sara the next day, it was hard to tell that the striped fabric rim on the back was on backwards so I think I got away with this so now it is residing in the showcase in the shop.  Can't wait for Clementine to join him.  I know he's lonely.   I think I mentioned before that while working on Theodore I was also working on other small projects, which now are also done.  I've done many of the Noteworthy Needle's pails so the "Teacher's Pail" became a must for our June display.  These are always fast and easy stitches as well as easy finishes.  It doesn't take a lot of floss so I use these type of projects to use left over floss I have so while I try to use what is suggested, if I have something close sitting beside me, well I use it so I don't have to go look.  Lazy I know but I do get to use up left overs sitting around me. 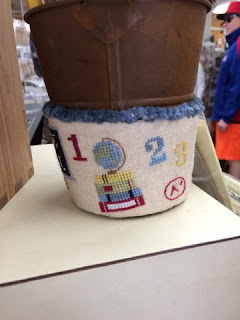 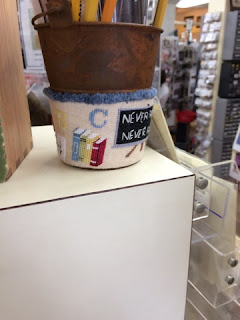 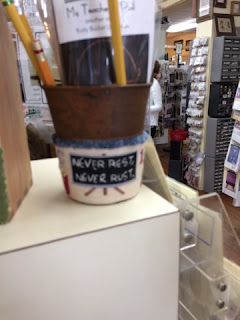 I used Lady Dot chenille to finish off the band.  Fun piece.  Then Hinzeit's "I love America" which takes one night to stitch and then I popped it in a frame which we will have in the shop for sale in a week or two so that was fast and easy.  And of course, I lost the first liberty bell charm and had to take a second chart to get another one...and I felt it was too important to leave off.  Fun stitch and now I'm ready for July 4th, or at least I'm working towards it. 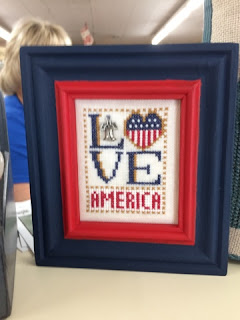 And finally the last finish is Little House Needleworks, "Needlework ABC".  This chart comes with 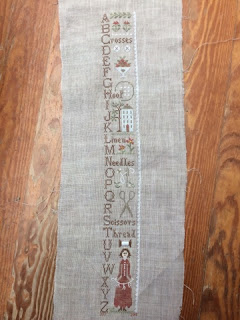 the floss so I used what was given.  I did pop on beads for the centers of the flowers just because I like dimension on my pieces.  I cross stitched the thread on the spool, but then went over it with satin stitch.  Judy pointed out that I didn't replace the stitched  bee with my favorite bitty bee, but in this instance, while I pondered doing that, I felt it would be too out of character with the rest of the sampler.  (Yes, I do try to think about the embellishments before using them...I don't just willy nilly stick them on, although sometimes I do get carried away).   It will be finished in the Classic Colorworks white frame shown on the chart and since it hasn't arrived yet you are seeing just the finished piece unframed (obviously).  This is the piece I told you about earlier,  I was stitching just 3 letters a day and on the last two days of the stitch I stitched 4 letters per day.  Easy to attain goals...always a good thing.  Now, with all of that off the todo list I have to pick new projects. The most fun of all.  When I got to the shop guess what was waiting for me.  A sign from the stitching God that this should be my new project....the red tray for  the American Homestead project. 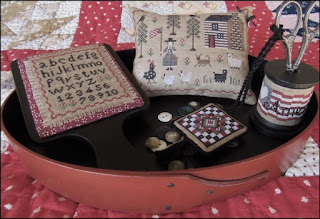 So I'm off to get my fabric and fibers.  Talk to you again soon...although stitchers start arriving for our Betsy Morgan weekend tomorrow so not sure I'll be talking again before Monday....I just never know.  Can't wait, Paola and Stasi will both be here....Debbie was suppose to be here but she's become accident prone and did something to her ankle so she's on crutches and in pain.  Fingers crossed the pain subsides and she can get here anyway.  But we are sure to have fun this weekend.  So many stitchers in the house is a good thing.  Have a great weekend.
Posted by Sally Rutka at 10:49 AM 2 comments: