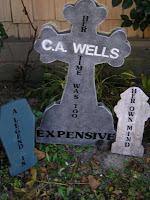 My final retreat (mini this time) is over and I'm back in the office, in the shop, doing the job I'm suppose to be doing...but what fun I've had for the past 3 weeks...stitching, stitching, stitching. When C.A. Wells cancelled the class she was suppose to be teaching this past weekend due to "the expense of her time", the stitchers decided they still wanted to get together..so October 31-Nov. 2nd became our First Annual C.A. Wells Memorial Weekend Retreat. While I hosted Debbie L., Kay Fletcher played hostess to Kathy R., Jennifer H., Stacy S., Jackie J. and Mary L. On Saturday we joined together to stitch, discuss our cancelled class, hold a memorial service for C.A. Wells and we had a ball. And I have to tell you it's the first time during an event where I actually sat down and stitched. And I

stitched each day until about 6:30 or 7:00 pm. (starting around 9:00 a.m.)...oh, Lordy I had a great weekend. And the weather...oh, my God...the weather was perfect. As you can see in the pictures we are not wearing jackets, a couple of us had on short sleeved shirts..in fact the sun was shining and I swear it got up to at least 70 degrees...gorgeous..the perfect day for our memorial. We stitched all afternoon and then decided to have our little memorial service where we gathered around the tombstones and gave our thoughts about C.A. Wells. Great weekend, great friends...can't wait to do it again next year, when we'll hold another memorial to C.A. Wells. So C.A. you may not have been here, but you gave us a lot of laughs anyway. Ladies, thanks for being here with me...I had fun. 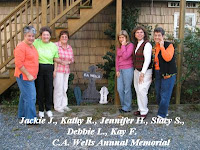