In the last post, I talked about Autumn Gathering by Brenda Gervais, as I had the stitching done but the finishing was not.  Well, it's completed now....and it wasn't that hard, amazingly enough. 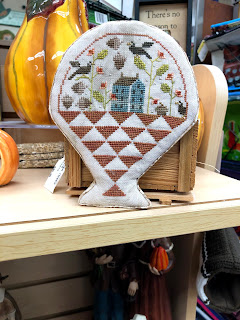 I'm really pleased with this finish as a shaped finish is always a little trickier than a square or circle, however, everything was a little easier than I had anticipated.  Brenda supplies a template for the cutout so having that made it easier than doing my own.  I gathered the circular top so it fit with no issues (just as you do when finishing a circular design) and I cut as close to the neck as I could without worrying and while I probably should have cut it a little closer, I was pleased with that as well.  When it came to the twill tape edging, I didn't realize we had the right size in the shop but was thrilled to see that we did so I decided to use it as well.  I loved Sara's reaction when I showed her the Twill and she said "oh, you have to sew it on both sides"...and after I finally stopped laughing I informed her I was gluing it on.  Yes I said glue.  I will glue on cording, etc., if it is not what I consider an heirloom piece, but a piece I enjoyed stitching but know when I go it won't be passed down through the generations.  The only problem I had with this finish is a personal thing.  I want everything I stitch to have a purpose.  I don't know why it's just part of my process.  So after the challenge of finishing it, I asked "What is it for?"  Stasi and Sara both answered it's just a decoration.  Finally, it was decided it should be a bowl filler.  While I have 2 dough bowls which I have filled with rolls, pincushions, ornaments, etc., this is not dimensional it's just flat, so I struggled.  Too late I thought, I could have made it into a needlebook or added a pocket to the back for needles and scissors.  And I suppose I could continue and add a back to it and still do those things, but, you know when you think you are done, often you are really done and don't want to put any more time into it.  That's where I am at this point.  So I put it on the counter in front of another piece and hopefully it will sit there and not fall on the floor.  But I have to say I liked stitching it and didn't mind finishing it.  I stitched on Fawn 36 ct using the fibers indicated.  I started out using 1 thread,  wasn't happy with it so I ended up using 2 strands for stitching.  The only exception to that was the stems of the flowers which I did over one using the stem stitch.  That made a pretty stem I think.  Anyway, moving now to another start and I might just return for a couple of fun days stitching on the SAL Coming to America which I have dearly loved.  I was trying to hold out until closer to the end day, November 6th, as I'm on the final section and really want the  finish to be on day 66. So I'll just stitch a few rows and then put it down again.  It's been exciting to see where everyone is.  It really doesn't matter when we get ours done, so if you aren't as far ahead as you'd like to be, don't worry there are others right where you are.  And it's not really about the end date as much as it is about the journey.  So whatever you are working on, enjoy the stitch.