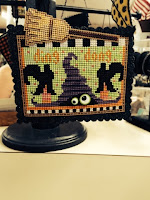 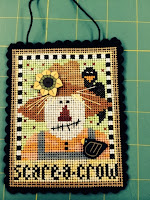 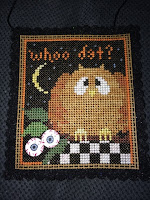 Three more of Val's Ornaments and probably the last you will see from me this year, although it is tempting to finish the series, but I think I've already moved on for now.  Anyway, these were already finished by Jamboree so it isn't that I've stitched these up in the last 2 weeks.  But the more I stitched this series the more I enjoyed it, especially the finish which I have mentioned after each finish.  So easy.  Over the weekend I worked in Sea Trader and  I also searched for new stitching, but not very hard as I've been working on a couple of pieces taken from the "already started" pile and I'm almost done with one of them.  I decided to work each one alternating them  everyday.  So today I brought, Hands on Design, "Stitch Every Day" which is my  mantra.  After starting over (I started stitching the bottom section over 2 when it was suppose to be over 4-made a big difference so I tore it out) when I picked it up again, I  find that it is moving along quite nicely.  I also found after getting 1/3" of it complete that I had left out the 2 lines of stitching about the bottom border.  I was too far along, and had already started over once before, so I decided to keep going and not worry about it.  I don't think anyone will notice especially if they have never seen it before to know that the lines were suppose to be there.  Sara agreed with me when I showed it to her this morning.  So I shall carry on. I'm really enjoying the stitch.  My other project, Drawn Thread's "Give Thanks" was finished last night, however I may be pulling some last stitches out as again, I made a noticeable mistake...darn it I hate when this happens.  But I loved this stitch as well.  It is so much easier to stitch on a project when I'm loving it, don't you find that to be so.  I do start many a stitch and find after a day or two that I'm not loving it so much.  It could be for a variety of reasons, don't like the colors, fibers, fabric, it's not turning out like I thought it would....yes any number of reasons.  If I'm stitching for the shop I try to stay as true to the pattern as possible and tend not to make too many changes (of course there have been exceptions to this rule) as it throws off not only the customers but the sales person who has to know what the changes are.  Now if I'm stitching for myself or as a gift, well I do whatever the hell I want and damn the consequences. Anyway, today will be spent getting ready for this weekends event, The C.A. Wells memorial weekend.  This started out as a bitch stitching weekend for those who signed up for the C.A. Wells class which was cancelled by C.A. a week before she was due here and her reason, "It wasn't worth her time", just mad my blood boil.  It was so insulting to me, and really disrespectful to the stitchers who had signed up to come.  When we contacted the stitchers to tell them, some of them asked if they could come anyway and just have a retreat.  We called it "the C.A. Wells Memorial Weekend" and we've had more fun at this retreat that we would have with just a class with her.  Sara and whoever is working in the shop at the time, spend a couple of days getting the lobby of the hotel ready (needless to say the hotel is now closed for the winter) and we pull decorations for Halloween from our own stash, from Sea Trader, from Michael's and Hobby Lobby and just have fun with it.  We still have the original women coming to it and all of us bring food, enough to feed an army, and for 2 days we sit, eat, bitch, eat, work on joint projects, eat, shop when we are getting sleepy, eat and just have a 2 day eat a thon.  For Sara and me,  it's an easier weekend because it's not a shop event so much anymore but an event put on by the women who signed up.  Of course, now we all bring goodie bags for everyone, so it is also a goodie bag bonanza.  So today will be dedicated to getting ready for the weekend.  While we haven't seen our Debbie Liming since Hunter arrived (her first grandchild), she is due in town tomorrow for the event.  So we have a celebration of sorts as one of us is now a first time grandmother.  Most of us have had that wonderful experience, in fact most of us boast about our multiple grandchildren, but we are always excited when someone else joins out club....it's the best club in the world.  I'll try to get pictures up of the remaining finishes I've had,  in the next few days.  In the meantime, have a great day.