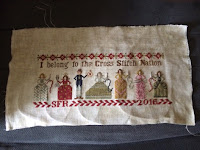 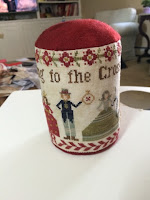 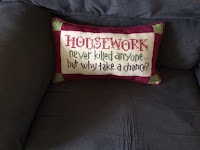 Mother's Day treat from Sara, and so true for me.  I hate housework so this was the perfect pillow for her to stitch as a gift.  She stitched it on the 20 (?) ct. linen so it's a nice size.  It's approx. 15" x 8" so it looks great on the sofa or chair.  Thanks Sara, I love it!  Right now I'm letting the shop use it so if you come in to the shop you can see it live and in person.   Since I've been home a couple of days I have tried to get some housework done, especially in my stitching room.  I've been going through the piles now for a couple of days, how did all this crap get in here anyway?  I need to let some stuff go, I honestly save everything thinking I will re-purpose it.  And while I do find uses for things most people would have chucked long ago, even I couldn't find a purpose for all this.  So purging shall commence.  Since I finished "Cross Stitch Nation" which Sara has shown on our facebook page (and you know it will be here next), I'm going through the stash to pull out something new...Love to find something new.    I had pulled fibers and fabric for Hands on Design's "Wool Block Party" earlier, but I can't just stop with one project, because last night I also finished something I started a while ago that's also been released, "Button Posies" so that means I also get to pull out something that's been started before to finish.....so now I'm on the look out for both new and old projects.  Of course, there are several in each area to choose from...so that's where the trouble begins and ends.  I'm still loving the Erica Michaels strawberries and really want to stitch one on gauze, so perhaps that will be the winner but since  I have the attention span of a child in a candy store and I've got 5 more bags to look through, well I'm still undecided on new.  As for old....well that's tougher since I've already worked on them and put them away, I put them away for a reason.  Now can I get beyond that, pull them out and do what I have to in order to finish them? Well, tonight will be the moment of truth as I have to pick something to work on or just sit all night watching T.V. feeling unproductive.  This is the weekend all the cars are in town and for 2 days I had one of the cars under my window revving up the engine constantly and apparently unable to actually get it in gear to move.  I was about to scream out the window and tell them to shut the damn thing off and give me some peace, but decided I might be better off just coming in to work early.  I was  bitching and complaining about this car so much I was afraid I'd have a stroke.  But God heard me and when I got home last night after work the car was covered with a tarp and thankfully the crew was done with it.  Even with the constant running of cars on Baltimore Ave. it was still quiet enough for me.  Heaven was restored!  I have to say our weather has not cooperated.  It was gorgeous, sunny and warm on Thursday and Friday, however, today it is raining and suppose to rain all day and into tomorrow....the cars don't run much when it rains so I'm afraid the car weekend is a disappointment for the folks here for it.  We still haven't had it warm enough to warrant air conditioning for which I'm thrilled.  I don't do well in heat, so high 60's and 70's is just fine with me.  And since we've got the college kids in town for a couple of weeks and then the high school seniors for a month of a different kind of hell, I really don't care if it rains every single night starting around 10 and lasts until 10 am the next morning.  All I really want is peace and quiet at night.  But I know summer weather will be here soon and then I'll complain about the heat.  Not sure if it's ever going to be just right for me...either too noisy, too hot or too cold.  Well, I really don't care as long as I've got a/c in the summer and heat in the winter and I can always close the winters against noise.....unless it's right under my window...then apparently it does matter whether the window is up or down I hear it.  Well, I'm off to the shop to look at the new charts one more time in my struggle to make up my mind.  Tomorrow I'll blog about one of the most fun projects I've done.....have a great weekend whatever you do!
Posted by Sally Rutka at 8:37 AM 2 comments: 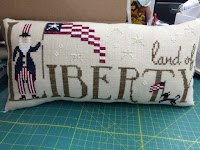 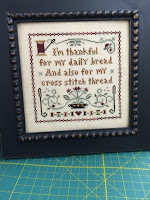 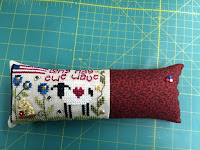