I got to work this morning bright and early, ready to take on the world...and that's about what I feel like I'm doing. First I open up e-mail, which actually worked today horray...and found a "your order has shipped", so I take a look and it says that the refrigerator that was ordered 10/9/2009 has shipped to the tune of $1700, and my credit card has been charged. So I'm freaking....10/9/2010 and you've shipped July 2010. Believe me, if I said I needed a refrigerator I couldn't wait 9 months to get it....I mean the snow and ice would have kept things cold in January-March, but with the summer we've had, well I just couldn't have waited. First I don't remember ordering a refrigerator off the internet, but I'm not going to swear I didn't look at them, but in October...hell that's around the Jamboree...believe me I'm too busy at that time to even think about it. Anyway, Sara gets home from wherever and I meet her with, "Sara, I'm freakin and don't know what to do." Her response..."I just love when I walk through the door and you hit me with I'm freakin'. Calm down and let me see it." So I show her we go on-line get the # of the company and call it and this guy says, "This was just an e-mail reminder that we are still here (like who gives a crap) and we haven't shipped anything out to you, and we haven't charged your card." Sara questioned why he send an e-mail saying he had charged the card and he just said, he hadn't it was a reminder only that he was there. After all was said and done Sara said "Mom go in and see if your card has been charged." It was at that point that I realized it was a card I had cancelled as there was suspicious activity on it last year. If I had only remembered that it would have saved us a whole lot of time. Anyway, just another freak-out on my part...they seem to be coming closer together, much like hot flashes...in this heat I'm just one steady long hot flash. And according to the weather report we're in for at least 7 more days of this. I know I complained about the cold, but I swear I'll never bitch again about it...at least I think I won't. Oh, yes, we're experiencing something in the shop that I can't stand. Yesterday Renee found what use to be a kit, however, now it's just the fabric and charms as someone opened the Lizzie Kate kit and stole the directions. I found 2 kits a couple of weeks ago with the same thing happening. Now what I want to say is this...for God's sake don't go to the trouble of opening the kits and stealing the directions...I can't do anything with what's left so take the whole damn thing and let me live in ignorance. I'll realize soon enough when I take inventory that things are stolen, I don't need a reminder every day. Yes, it sure is fun owning a little needlework shop on the ocean. Every day is a holiday! Oh, a woman came into the shop last night and Sara was standing there, took one look at her and eyeballed me about it so I could get a good look and let me just say this ladies, Just because something fits....doesn't mean you should wear it. The woman was wearing what looked like a Lilly Pulitzer skirt with a coordinating top...gorgeous..if she was the size person who could wear a short short skirt, but unfortunately she wasn't. She had a little size to her...not obese, and in a pair of loose fitting Lilly Pulitzer slacks and the same top things would have been good, but the short short skirt on anyone who is a little larger than a twig...While it may look alright to you in the front (and that's questionable) from the back where it lifts a little because of our butts...well this woman's business will be out there for all to see if she so much as bends over to pick up a penny. So before leaving your house, turn around in front of a mirror and pick up something off the floor...if you can see your VaJaJa...it's time to retire the skirt. FYI...the Prairie Schooler 2010 Santa is out and it's being delivered as I type along with 4 new Prairie Schooler leaflets. Along with that is the new Shepherd's Bush kits and their new chart...I'll have them up on the website today so take a look.
Posted by Sally Rutka at 7:46 AM 4 comments:

Honestly, I can't remember anything at this point. Last night I hit send without adding the pictures of the ladies. And since we made them sit there in that heat so I could have a picture...well, it was necessary that I actually post it. But first I wanted you to see the purse Janet sent 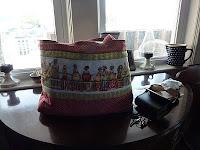 me. Do you love the fabric? I've shown you some of the inside as well...so you could see that she added pockets on both sides inside and the girls on the fabric, aren't they fabulous. Look closely and you will see that each of them is dressed as a fruit. Love It!!!! I do believe I'm the pineapple, although the butts of the ladies as pears sure reminds me of my butt...so perhaps there's a little of me in each of the ladies. Anyway, I carry it as my purse and 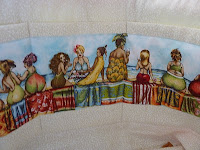 absolutely love showing it off. Thanks so much Janet. The next 2 pictures are the "ladies from New York"...the lobby at this point had to be close to 90 degrees (at least in my mind) but you would never know it looking at these girls....heat just didn't seem to bother them...at least in the lobby...outside yesterday just about did them in. As I'm looking at these pictures I'm really missing the ladies. I'm hoping they find their way back to 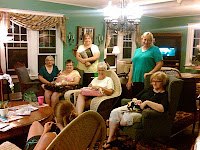 us. Wouldn't it be great if we just had stitchers at the hotel....a retreat every day. My God, I'd never get anything done! Sara still lives her dream of turning the hotel into a needlework academy so who knows...one day. Isn't it nice to have a dream? Well on the weather front today it's just more of the same, 90 degrees with chances of showers. But then I see the flash floods etc., that are wiping out homes and I think O.K., sitting in a/c during 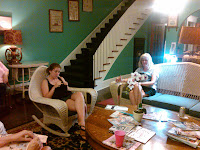 90 degrees days is just not that bad! My heart aches for those folks who are struggling with all sorts of bad situations...I can't imagine losing my home and all the memories contained within. Last week was a real good week as we had stitchers in the house...along with the ladies from New York we also had Mary Porter here for a few days, and Debbie Brotzman and her family were here for a week....2 weeks ago. So there is some sanity in my life...Always nice to catch up to what's happening in Mary and Tom's life, as well as Debbie's. This time last year Debbie was getting ready for her daughter's wedding and was stitching like a madman trying to get everything finished before the big event. And to have real stitchers in the shop is an absolute treat. People who know what floss is really called. Anyway, that's it for this morning (it's only 8:24 a.m.) and I have to get ready for another day so I'm sending this on....have a great day~!
Posted by Sally Rutka at 5:00 AM 2 comments:

Help...I'm falling asleep and I can't wake up!