Monday  I worked in Salty Yarn...well working is an activity I did very little of and shopping for my personal stash is much more accurate.  Anyway, as I was grabbing as much as I could, without Sara's eyeball following me around and the constant nagging, "like you don't have enough already, or did you take it out of inventory, or worse, please don't take that as we only have a couple left in stock."  Yes, there was no one to monitor me and I shopped, stole, call it whatever you want but I did it all day, charts, fabric, fibers, yes I was drunk on stitching supplies.  One of the things I snagged was a round box for my Brenda Gervais, Holiday Hoopla-Christmas. 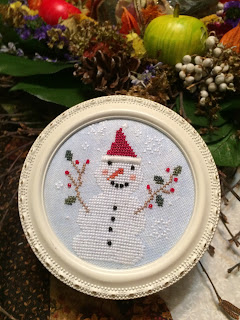 I love these Hoopla's and yet have not used a hoop for framing yet.  These boxes come in three different colors, Antique White, Black, and a Pecan color.  They were originally for many of the Shepherd's Bush round designs from a few years ago.  I stitched about 6 of those...loved it and the finish was fast so these are "go-to's" for me when it's a 3" round piece.  I opted for the white because I was thinking snow, but seeing now I think I'm going to switch it out for either black or pecan or maybe not.  I'll try all three and see which is better, or perhaps I'll find the pedestal frame during the Great clean up of 2019.   I stitched this on 32 ct. Vintage Blue Whisper linen. I did use Mill Hill black beads for his eyes, buttons, and mouth.    It's the perfect color for snowmen even though it doesn't pop as much as I'd like in the picture,  it does look better in person.  Anyway, I'm pleased to have it finished and now it's ready to go to the shop.  I used the recommended threads, almost..I didn't have the Ruby Slipper so I substituted GA Schoolhouse Red.  But in my binge yesterday I picked up a skein, or two, of Ruby Slipper and it is very similar to the Schoolhouse Red.  So now I'm moving on and have been working on another Brenda Gervais, "Santa's Tree Farm."   I already know how I'm going to finish this (half the problem with finishing is not knowing what to do with a piece), so I should have rushed through this, but I didn't have a couple of the recommended floss colors so I dragged my feet.  I don't have a problem substituting fibers if I don't have the ones called for, but in this case, I was having an issue with the greens.   So yesterday in my burglary of Salty Yarns I got the correct greens so I'm  back in business.  I'm on my second go-round with this as I started stitching it over 1 on 36 ct thinking it would fit on the 3 x 5 papier mache box.  But I had trouble stitching one of the elements as I couldn't get it to look right so I re-examined the chart and discovered I should have been stitching over 2...darn it.  So I started it again and of course, it's going much faster so I should have it done by the weekend...yea!  It looks so much bigger than the box lid, but I keep measuring it and I think it's going to fit....I'm making sure it does cause I'm not starting over.  As I said earlier, with Sara gone I was called into work.    Meanwhile, Vickie was working Sea Trader and informed me about what a great weekend they had and they had several stitchers come from out of town.  I was shocked because the weather was not great and I had given some thought to closing.  Thank God I didn't.  Monday was cloudy at times but the temperature was in the high 40's, but we barely saw anyone, hence my shopping extravaganza.  While I would have loved to see stitchers, imagine being alone in a needlework store for 6 hours and being told you can grab as much as you want before going home.   Needlework is my drug of choice and I love to binge on it.  Yes, there are moments I wonder what the hell I was thinking when I look at some of what I grabbed days later, but at that moment I was flying high.   I was like a kid in a candy store.   I'm proud to say at the end of the day I did relinquish a couple of patterns and put them back (but only because I think I took them home once before.) So I'm stitching like crazy, cleaning not like crazy but trying to set goals each day and see progress being made.  Must get back to my stitching.  Have a great day and I hope you find time to stitch.
Posted by Sally Rutka at 10:21 AM

Sally, are you not liking the white frame becasue too much white? What if you put some red, or any color, chenille around the frame...either inside the edge or in that depression on the outside edge of the frame?

Oh, Stasi, good idea. I'll give it a try next time I'm in the shop (I delivered it to them a couple of hours ago) and I'll let you know how it goes. Don't know why I didn't think of that. Thanks again for the suggestion