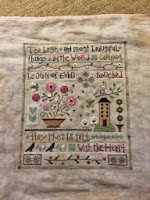 Michael is sick and has been home in bed for 2 days, and the extra time has given me the time necessary to finish, Things Unseen, the mystery sampler by Lizzie Kate Designs.  While I'm normally not a sampler person, this proved to be whimsical and since it was all over two relatively easy to stitch.  I created a problem for myself when I started the border stitch using one thread of floss, however, when I started the sampler itself I realized I like 2 threads better, but was too lazy to take out the border which I started so I left it in.  I jump around so that I don't end up with the border at the end, and I don't do it to begin with as any mistake made in counting would mean you'd have to tear out a lot if you made a counting mistake on the border.  So, I work the border right along with the design, that way any mistake is caught early.  Anyway, after working an inside section I would thread the needle with 2 strands and start on the border again.  After a while of stitching I'd realize it and pull it out and restitch the border with 1 strand.  However, I didn't realize I had done it with one section and by the time I noticed it I was so close to being done I just left it.  It isn't that glaring so I don't think it will show up once it is framed and hung....well that's what I'm telling myself anyway.  At first I had planned to use the 2 buttons made for this piece, but I also found I wanted to switch out the stitched bees for the Twisted Thread Bitty Bees and felt it might be too much extra stuff put on the sampler so I decided to go back stitch the portions what are covered with the buttons and then added the bitty bees where the stitched bees went.  I also added black beads to the center of the 2 motifs on the bottom, the one birds eye and the matching motif to the bottom motifs.  It gave me the satisfaction of adding beads, I do love a bead or two on a sampler....oh, yet on any stitching.  So with that finished it's off to find something new to stitch...whoppee!!!!  And back to finishing Sweet Heart of Mine.  Have a great day...stay inside warm and stitching.  It's -4 here with the wind chill so you know I'll be staying in, but Michael returns to school today so I'll be doing work, at least in the morning.