Where did my stitching mojo go?

Before I start the whining let me first say I hope you all have had a great beginning to our new century, year, whatever.   I had a lovely Christmas, a little stress filled, but that's normal and my New Year's eve was spent with all the grandchildren, large and small, and they all left by 9:30 and I was asleep way before the ball dropped so I was well rested to start the new year.  One would think the stitching would come out, but they would be mistaken.  I've been in a serious no stitching zone since November and prior to this weekend had really not stitched.  I always bring it to work, just in case, but nothing.  Last Friday I arrived with my tote and with resolve to at least work on Peppermint Pals even if I just did one thread and then stopped.  As it turned out I actually stitched for a couple of hours.  Before the drought I had finished 1/2 of the design and as I got more of the snowman's torso done I got excited.  Friday night when I got home from work I pulled it out and completed it.  I even added beads, turkey work on the scarf and some satin stitch.  I could feel my stitching mojo coming back.  Not completely as I couldn't figure out what to stitch after going through several bags.  I finally decided to do one of my first loves of needlework, Shepherd's Bush.  So I pulled one of their kits (thought kit would be better since everything is in there and I wouldn't have to hunt for stuff, which has become harder since Vernon and John, who are putting heated flooring in my bathroom, as well as redesigning the room, put the furniture which use to be in my bathroom into my stitching room and I can't get to anything.  Which means putting Peppermint Pals together is almost impossible...but heated flooring in my bathroom is so worth it.  Anyway at work on Saturday I stitched about 1/4 of the kit and when I got home I also worked on it, so I think it won't be long before I'm back to my usual self and I'm excited.  Last Sunday, I already grabbed 4 new charts and at home, I also started pulling fibers for a new stitch...so it won't be much longer before I'm stitching 24/7.  Can't wait!  This week, 1/16/2020,  Camp Wannastitch is in town so we are gearing up for them and Stasi Buhrman is here to cut fabric, Thank God!  Debbie Liming is also here,  she thinks to lend emotional support, but Sara has a job all lined up for her so she's in for a shock.   I'm basically just a seat filler at this point and there are times I don't do very well at that.  But as I keep telling Sara, "You get what you pay for."  Since no one hands me a pay check you really can't expect much from me.  I was hoping for mild weather again for the stitchers coming into town, but today it looks like 38 is going to be our high, but tomorrow it should go into the '40s and '50s on Sunday.  Here's hoping.  In the meantime, I wanted to show you the Peppermint Pals by Brenda Gervais, that I did finish.  Even though it's taken far to long to finish it, I loved the stitch, adored the piece and can't wait to get the finishing done. 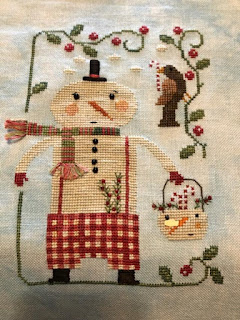 I stitched him on 28 ct. PTP Helix (a regular go-to for me for snowmen), using the listed threads but adding dimension with beads for berries on the snowman and in his snowman bucket.  I used turkey work on the ends of the scarf and black beads for his eyes and buttons.  I also did satin stitch for the hat and the boots just because.  Not sure why, didn't add anything frankly, but I wanted to.  Anyway, this is such a fun series.  There are 3 in this series so far, Boo was the pumpkin-headed girl which I did in October, Santa for Christmas which I haven't done yet and then this one.  Cute and fun.  Well, that's what I've done in the last month and a half, how about you?  Stasi Buhrman is here with show and tell and she's finished so many pieces in the same amount of time that I did this one that I'm embarrassed.  Got to get my mojo back big time.  I started the Erica Michael's snowman strawberry on Monday on 28 ct. over one and told Sara I was going to try and have it done by this weekend....that so hasn't happened and in fact, I didn't stitch on it at all for 2 straight days.  But I did get back to it last night and put a few stitches in.  Today I've pulled another chart and will be taking it to work with me (because I'm stitching over 2 on this one I thought it might be easier to stitch at work) so I do feel this is more normal for me having multiple projects going at one time.  Let's hope it helps get the juices flowing again.  Have a great weekend and if you are down here with the Camp Wannastitch group, stop on by we'd love to see what you are working on.

I feel your pain! I had the same problem a year or so ago. Your Brenda Gervais pillows helped me. Quick results on something I love, making them in beautiful colors. That probably won’t work for you but maybe something different to stitch? It will come back, you just need to hit on the right inspiration!

I too have been where you are. It will come back believe me!!