Cleaning up is such a pain in my butt

I talked about my dislike for designing in my last blog, however as much as I hate to design, I really hate to clean. I also hate the mess I create so I live in this vicious circle of hating it and yet hating to clean it up.  But I began the task after Jamboree as I told myself I would.  I had almost finished the clean up, and also was able to put together a start to my fall display (most of what you see if it's stitching related is discontinued so I was able to bring them home.  Most of my stitching resides in the shop.  But it was nice to at last get something representing the season displayed.  Usually it just doesn't get done at all. 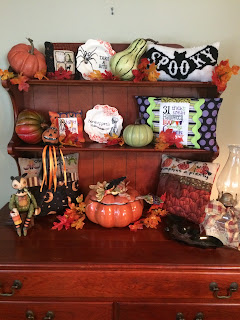 The only thing left to clean up after Monday was my sewing machine, thread and bobbin case, as I had to work on the finishing of a Brenda Gervais piece.  Yesterday, Tuesday, I got the pillow sewn and I thought I was home free and moved the sewing machine.  Eureka, dining room almost done.  And then this morning, things started coming out of the stitching room back to the dining room.  Drat!!! I sure do hate when that happens.  And now, "Boo to You" by Brenda Gervais 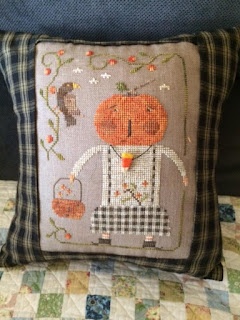