Yes last week I only worked one day in the shop and one day in the office....and the rest of the time my behind was firmly settled into my sofa along with linen, needles and plenty of charts.    Had two finishes last week, the third part of The Laundry Company, "Irony" and now that series is complete.  I framed them all alike because I liked the washboards, but also love the way the original model was finished so I debated a lot about that finishing, but once I ordered the washboards it was go time.  I felt it should have been a two day stitch, however, it was more like a five day stitch since I kept working on other things at the same time. 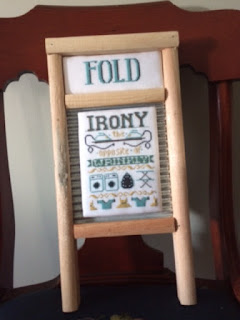 Then it was time to move on to the finishing of Hands on Designs newest short stack, "Where Liberty Dwells."  Another easy stitch which I had finished on the 4th of July, but didn't put it in it's final form. 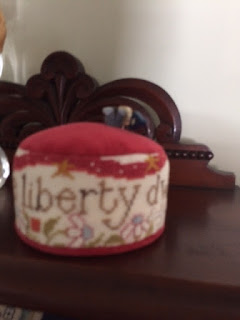 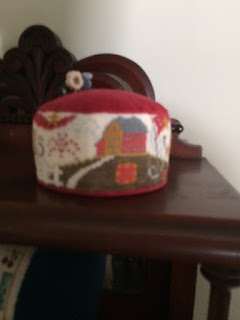 I stitched in the colors shown on chart, but I did use Lakeside Linen, 32 ct. Magnolia since I had a piece of that at home, and I didn't want to wait to get into the shop, I'm all about instant gratification.    An easy stitch and love the short stacks.  Can't wait for the next one...could it be Halloween?  I sure hope so!  And finally my last finish done this week, in fact the stitching was finished 2 days ago but I didn't get around to the finishing until 5:30 a.m. today.  I'm so motivated in the morning, early because by 10 a.m. I'm working on a nap...Ah, retirement I can barely stay awake.  Anyway, part 4 of the Noah's Christmas series arrived in the shop last week and in my goal of actually finishing the entire series I'm trying to take the chart home and get them done right way....so far so good.  So here are Panda's and Parrots, Part 4 of "Noah's Christmas Ark."  These are a two day stitch at most I think so it's a good fast project for those times you just need to finish something.  And if you start now, you will have a complete set by Christmas! (I'm sure she said there would be 12, so that would suggest there are two more chart packs to come, but she also said the final chart would be delivered in February 2019, so you might not have the complete set by Christmas.)  And now I get to pick out new projects. 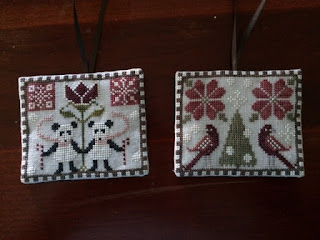 At first I was thinking beach, because our display for August is anything ocean, beachy, vacation.  But...then I made the mistake of checking out some of my Halloween projects and that led to Christmas and I'm once again in hot water with the amount of projects I've pulled, and I'm not even talking about anything prior to 2017.  And since Sara showed the new needlepoint canvases she got in I'm starting to think Needlepoint might be a nice change.  But I decided to stick with August's theme, Beachy, first since that's what I have at home and picked out Blackberry Lane's "Relaxing at the Beach" camper. 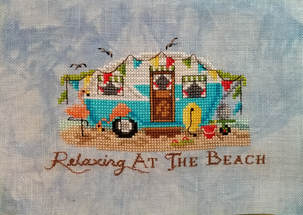 The picture here is the model, not my stitching.  I started it a couple of nights ago, worked on the bottom of the trailer and it was going quickly and thought I'd be done in no time, but as with all Marie's pieces, there is a lot of detail and shading that has really slowed me down, but I'm loving the stitch and think this camper is so cute, I don't mind the constant  switch from color to color, because the end result is fabulous.  At first I looked at this as an 18 ct. linen piece over two, which would have made it nice for a pillow,  but in the end decided to stitch it as shown on the chart, 28 or 32 ct. and am pleased so far.  Have a great weekend and keep that needle going.