We had our first class of 2011, Betsy Morgan's "Toy Chest", which began with the arrival of the first stitchers on Wednesday, one of which, Paola traveled all th 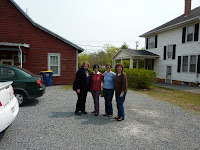 e way from Luxenburg. She was such a wonderful addition to our fold and we had such a wonderful time getting to know her. She not only arrived a few days early to explore Ocean City a little, but she stayed a couple of days after the class so we were able to take her to some real hot spots, Michaels and Serendipty Quilt Shop. Debbie Liming, Phyllis Yurack, Staci Buhrman, Sara and I decided to take Paola to Serendipity as it is the Moda fabric quilting shop in our area and it's fabulous. (That's Phyllis on the left, Paola, Staci, and Debbie) For the non-sewing stitcher (of which I'm one, although I do dabble) Moda is the fabric designed by Blackbird Designs and I use it all the time to finish smalls, the Black Bird stockings (which I still haven't completed) and anything else I can use it on...love it! Anyway, we had a wonderful day with the finale at Michaels. Apparently, Luxemburg has no Michaels so Paola and I spent about one hour in there searching for bargains, beads, anything to use on our stitching. It was a wonderful day filled with shopping and friends. Tuesday we said good-bye to everyone so it was a sad day for us. That meant we also had to go back to work. But I have to tell you, everyone who attended the Betsy Morgan class had a wonderful class 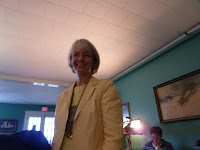 experience. First of all, Betsy Morgan...a great teacher(shown here) who gives you complete instructions...written down as part of the kit....pictures of the process as you complete each piece of the Toy Chest...and we completed one piece of the set, which becomes the Thimble holder and we learned every technique we will use putting the many parts of this project together. Everyone finished one piece, not just a few of us, including our token male, Greg McCord. We're so proud of him. It was his first experience being in a class, and aside from his tardiness in arriving, he did beautifully. Kudos to our Greg. So while the entire Toy Chest isn't finished, we are on the way. (the rest of the pictures were taken in the lobby while the class was taking place) I think everyone agreed that the weekend was a success. If you haven't had a chance to take a Betsy Morgan class....take one. The teaching is excellent. She was patient with the students, a 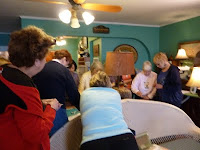 s I said her directions are complete and written down so you don't have to remember anything, and so complete we barely made any notations. She also gives you plenty of everything. You get extra fabric, extra finishing materials (beads, fibers, etc.) and brought extra of everything so while you practiced a technique you didn't even have to use the supplies in your kit. Unbelievable. I highly recommend Betsy to everyone. As with all our teachers she was also there and willing to help even when the class was over. She was so popular with the students that a couple of the students approached her after class while I was in the shop to ask if she would come back and teach two other classes on the same weekend (apparently some wanted one piece while others wanted 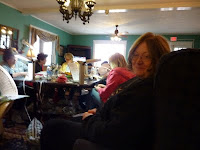 a different piece.) So when I returned to the hotel lobby they announced that she was coming back as soon as we told her a date. So while we had planned to bring her back to teach her latest piece, the casket, in 2012...we are now bringing her back in 2011 to teach 2 more classes, as well. You can take one or both classes that weekend, which we are still trying to fit into our schedule. Our C.A. Wells Memorial Weekend has been discussed, but it isn't carved in stone, we will let you know at a later date as soon as we figure it out, which should come in the next 3 weeks as soon as we get through the Spring Retreat. Right now we are getting things ready for Spring Retreat.....the boys are painting, the rooms are ready, Sara is getting her grocery list together and I'm orde ring from the companies like I have good sense. I'm battling the diabetes thing which is my own fault since I was diagnosed having type 2 a couple of years ago and while I paid attention to begin with...well, I let things slip. Then when I was having the pain shooting down my leg and went to the doctors, they had me take blood tests which showed my sugar had risen drastically since they last saw me. Apparently I was a candidate for a stroke at my levels so now I'm being watched like a hawk but not only by the doctors but Sara. I have to say my peeps have stood firmly behind me...Greg and Renee both delivered Easter Baskets on Sunday filled with sugar free candies (and you know they are 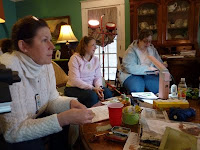 really pretty good.) So I can't thank everyone for their concern, and the goodies I've received. While the shingles were nothing in my case (which created the pain as they traveled down my nerve) and I'm so grateful they were mild. My father had shingles on his head and he felt pain if you even entered the room where he was, so believe me when they told me I had shingles I said, "No Way" there is no part of my body which I can't touch, I saw no rash, blisters or anything. I thought I had a pinched nerve somehow. But not only the hospital, but my personal physician informed me that while my case was very mild, I did indeed have them. After taking pain meds for the pain, and the anti-virals, I never had the pain again. But of course the diabetes has taken the focus off anything else. This time I'm not doing as well getting it under control...so I feel "off" all the time. My physician is on me constantly, getting my numbers every few days at first and now weekly. Changing my medication each week...honestly it's almost too much for me. For the last week I just haven't felt well, can't put my finger on it, but there's something not just right...but I'm not concerned...too many people watching me. I am concerned enough that I am taking my tests 3 times a day, watching my carb count...giving up so much of my bread...but not all, no sugar at all that I can tell, so I said good-bye to all candy, except sugar free (and how much of that can you eat when it has a gaseous affect on you). I ate yogurt only for days because I couldn't figure out what to eat...but finally I'm back on the protein thing. Anyway, I'm determined to figure this out and get me back on track to feeling great, O.K. with my body great isn't an option, but feeling normal for me. Now Shop Talk, we've run out of room once again....the knitting side is growing by leaps and bounds. I'm afraid Pat and I have run amuck ordering yarns...O.K., Pat was hesitant so perhaps I ran amuck, but how do you decide. Of course after seeing my credit card maxed out a couple of times, and the lack of room I've made some critical decisions...we're moving the yarns. This was in discussion all winter with Pat, and this week, of course after we're open again 7 days a week, I've decided to move the yarns to a different area of the shop to give it more room to grow, a little. This will create havoc since we're open every day and the guys are going to have to tear down shelving, etc. so we can move the stuff, but I've already warned them (I just hate it when they roll their eyes at me), and Pat is ready and willing to come in on her days off to help to hopefully we can get this done before the retreat. (that's what I'm hoping anyway) This has also given me a reason to start deleting some lines. Unfortunately, I've only chosen lines in Sea Trader to delete so far, (how can I decide which companies in the needlework industry to delete when I love it so much). And of course, we are bringing in canvaswork into the needlework side...you see, I don't seem to be helping the problem at all....although I am considering deleting crewel and stamped cross stitch...will that help? (Since those areas are so small I doubt it but it shows I'm trying). We've finally managed to get to spring weather down here or up here depending on where you live. Temperatures are in the mid 60's to 70's. We're now thinking air conditioning instead of heat, so that's a step in the right direction. I'm hoping this continues for Spring Retreat. For the Betsy Morgan class Saturday was a nightmare with not only rain, but wind driven rain. The racket from things blowing was deafening, but then Sunday it was sunny and bright so the stitchers could travel home in good weather. A wonderfully productive weekend. Our local group decided we would work on the Toy Chest at home getting the stitching done, but would then get together for finishing. It's always easier if you have others to help, and we were going to work on it first at Spring Retreat. However, since I still haven't finished my pre-stitch on Lauren Sauer's class (here in June), I've yet to work on the Toy Chest, so I'll be playing catch up. Hopefully I won't get too far behind, because I'm determined to have this piece finished in 2011. I'm tired of all my class pieces either up on the shelves languishing or stuffed in a bag waiting. No more I say...these have to be completed in the same year they were taught (at least that's my story in April...this may change by December...it's always nice to have a goal). Well, I'll try to be more current with my blog, but it's becoming harder and harder when I'm not feeling quite right...but again, I'm determined to get my life back on track so stay tuned. Have a great day!
Posted by Sally Rutka at 12:51 AM

WISH YOU WELL IN YOUR HEALTH ISSUES, I'VE BEEN THERE AND THE MAIN THING THAT BROUGHT MY SUGAR DOWN WAS WALKING--EVEN IF ONLY SLOWLY, JUST DO IT A LITTLE EVERYDAY---WE LIKE YOU TOO MUCH TO HAVE YOU NOT FEELING GOOD!