Year of Celebration-December is done.  While the stitching was completed last night, I did the finishing this morning.  So today I celebrate as I have finished the 12 part series, a first for me, and the final sample for the shop for 2019, or is it?   Well, at least in my mind I can concentrate on Christmas.  December was stitched on 38 ct. PTP Doubloon.   I did substitute on this one.  I used the Liberty as charted and Envy as charted but I changed the lettering to Onyx and the gold to Whiskey both by Weeks Dye Works.  The bells I attached in place of the stitched bells (you know I have to have dimension of some kind on almost every project.  Then the package was also changed to one color and the ribbon is a 1/16" white ribbon as is the bow.  I think the rest was done as charted.  Then I finished it using Christmas plaid scrapbook paper with a red ribbon hanger, and #321 DMC pearl cotton cording.  Thank you Cathy for such a fun series.  While finishing always challenges me, when I work on a series it gets easier and easier as I progress through another attempt at finishing a stitched piece, so by the time the 12th month was done the finishing was a breeze...or almost a breeze.  But as with the Apothecary Series-9th one, the 12th one on Year of Celebration became a challenge to stitch.  I made several mistakes on each, or I didn't like a color after stitching it so decided to take it out and replace it, so they both took longer than they should.  But I was determined in both cases to get them done and I'm so glad I did. 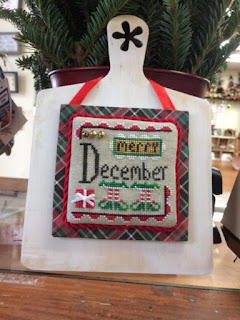 Year of Celebration-December-Hands on Design