I could only wish summer was like today, Friday,  June 21st...the breeze here is lovely and the temperature is moderate, of  course the sun is behind a cloud, but I wouldn't care if it was warmer and sun was out as long as the breeze remained.  The shop is picking up and we are now open from 10 a.m. until 9:45 p.m. and I went back on the schedule for 2 days last week.  Since I'm on the down side of the ankle injury I'm able to hobble around the shop with no cane, although I have it with me just in case.  I need to work on my stamina for Salty Yarns however, as I was fading fast after a day of cutting fabric.   Asked Sara what my schedule is for the next week and I don't have one.  Whoohoo, I'm on vacation again.  Love it!   But with all the time home I did get 2 new finishes.  I love 4th of July and have somewhat just skipped over the month of June as far as stitching models goes as I've done red, white and blue so much I'm thinking I'm even about over it.  In fact today I start Suffrage from Little House Needleworks....and this will be my end of red, white and blue.  But before I end, Seaside Sparrow just got in the shop a little over a week ago and I snatched one up and stitched it on 20 ct. white linen and changed the colors of the sparrow to red, white and blue (as if I had to say that.)  Now having said that, unbeknownst to me Judy Brunclik showed up and she was stitching the same thing only she went by the pattern and stitched on the suggested linen using the threads shown.....and I loved the suggested colors which would have gone more with the June theme...darn it!  But I went out of the box and I love mine too, but I think I love the recommended colors a little bit more.  Judy's is finished on  an Adam's Original zippered box and it's so cute.  I should have taken a picture...damn it next time.  Perhaps Sara will post it on the facebook page.  Anyway, I stitched the sparrow first in counted cross stitch and then satin stitched over the blue of the hat, the tie around the neck, and the wings.  It was a fun stitch though and then on to the finish...stand up.  Love him.... 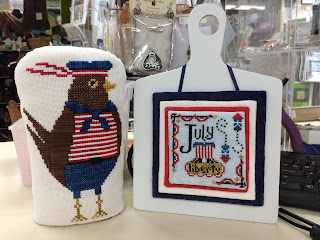 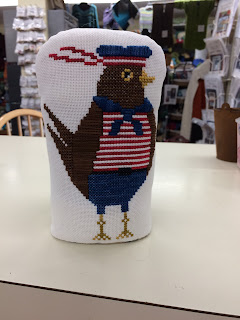 After finishing him I decided to finish Year of Celebration by Hands on Design- July.  This is exciting in that I've been able to actually finish 7 of these so far January thru July.  I might actually get all 12 done....personal best!  Anyway, this of course had to be red, white and blue, and I stitched it on the same fabric I stitched June on since it's a lovely lightly mottled blue which made it look like clouds were floating by to me.   When I was done I wanted to incorporate the colors in the finishing so I found a patriotic bag of finishing pieces that Lois (Lady Dot) made up and it contained not only the red, white and blue suede like fabric,  but also rick rack, both 1/2 " and smaller, as well of a couple of trims (which I'll use on othe projects).   I was going to use the patriotic ribbon to hang it but I've learned that I need to step back periodically and then remove one element or I've gone gaudy and tacky.  So I used plain blue instead.  Fun, fast and I'm 4th of July ready.  And, of course, used my favorite finishing right now - the olde hornbook.  Again, the hornbook is reusable as I didn't attach the piece to it.  Win Win! 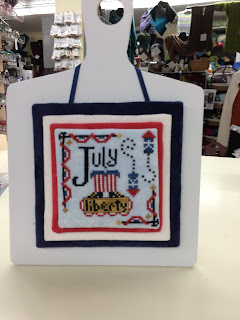 Since I don't have to work this week this means I have to do some work at home.  So I'm blogging and pulling out some pieces which have been laying around stitched for over a year and never been finished.  First one up....a Shepherd's Bush scissor fob, 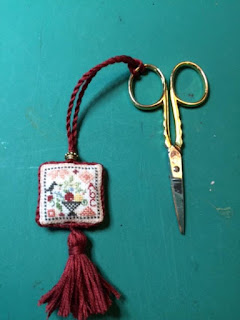 This was a 2008 Shepherd's Bush limited edition kit which you could only get thru them.  I've checked the web site and it isn't listed any longer, but their fob kits are fabulous and most stores stock them.  They are suppose to be stitched over two, but I love these fobs stitched over one.  They are so cute and look wonderful over one.  They are a bit more fidgety to finish, but it's worth it in the end.  I haven't finish a fob apparently in a while and I struggled with the Betsy Morgan tassel....I got the cording right, but the tassel I had to give up on...but I intend to keep at it until I once again am able to get it right.  But I feel so much better having one finish from 2018 (year I dated this as having finished the stitching) off the pile, and in the showcase (also called my corner cupboard).  I also am thrilled to announce I'm moving right along on two other wip, Blackberry Lane's snowman and my Shores of Hawk Run Hollow piece.  I could have had Blackberry Lane's done but I ran into the same problem working bottom up as I did when I worked from the top down on this one.  There are 4-5 reds involved, grey and white and then green.  I got the snowman stitched and then started on the scarf from the bottom up since originally I was working top to bottom and confused myself working on the scarf around his neck.  But I'm determined now, so last night I stitched row by row instead of working on one color at a time.  I also blew up the picture and am coordinating the color of the stitch with that.  It's taking way to long for my taste but I love her pieces and will stitch this or die trying.  I'm so close to being finished. 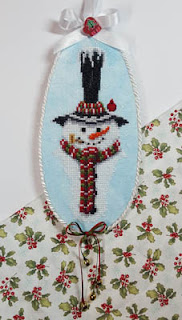 At the same time I'm also working on my challenge piece, Shore of Hawk Run Hollow...yes Jan I haven't worked on it all since our meeting and moving the deadline, but knowing I have to show some work has been done I'm back on it.  I am thrilled to announce I finally got the first sails done on the piece and I make myself stitch a couple hours a day on it so I'm praying I have the first 2 rows done before October.  As I told you the first row has 4 scenes and I have 3 3/4 done on that row.  2nd row has 2 scenes regular size and one scene that takes up 2 spaces...so I had done approx. 1/4 of the first scene and of course I can't match up whatever colors I picked so I'm going to have to start over on that.  I am now down 1/2 of the double in the center and that's it.  So I have a long way to go just to get my 2 rows completely done, but I'm plugging along each day and think I can do it.  In fact I almost enjoyed the stitch last night...a whole lot of white on those sails.  I, of course, changed colors and since my mother's ashes were thrown out to sea by one of the local boat captains, I've decided to dedicate the 3nd block on the 2nd row to her to I will be changing the name on that which shouldn't be too difficult, but I'm also thinking of changing the last block on the third row by putting sea gulls in there.  There's a good chance that by the time I get to that I say the hell with that idea and just stitch the block as it so it will be done.  That's a long way off so right now I'm trying to focus on the ship block.  Just one block at a time so I'm not overwhelmed  I haven't let myself start Suffrage Act which I need done before the forth, but I believe in the next day or two I will just have to take a break from wip and get it started so I can get it in the shop.  So many projects....and I'm getting older each day.  But I'm willing to try to finish them all before I go. 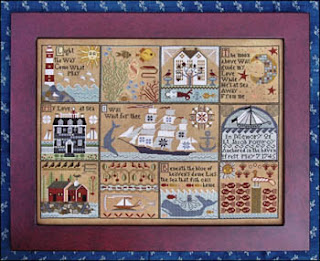